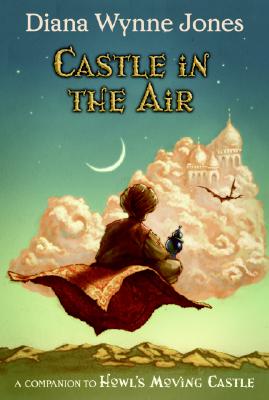 In this stunning sequel to Howl's Moving Castle, Diana Wynne Jones has again created a large-scale, fast-paced fantasy in which people and things are never quite what they seem.

There are good and bad djinns, a genie in a bottle, wizards, witches, cats and dogs (but are they cats and dogs?), and a mysterious floating castle filled with kidnapped princesses, as well as two puzzling prophecies. The story speeds along with tantalizing twists and turns until the prophecies are fulfilled, true identities are revealed, and all is resolved in a totally satisfying, breathtaking, surprise-filled ending.

Abdullah was a young and not very prosperous carpet dealer. His father, who had been disappointed in him, had left him only enough money to open a modest booth in the Bazaar. When he was not selling carpets, Abdullah spent his time daydreaming. In his dreams he was not the son of his father, but the long-lost son of a prince. There was also a princess who had been betrothed to him at birth. He was content with his life and his daydreams until, one day, a stranger sold him a magic carpet.

All fans of classic fantasy books deserve the pleasure of reading those by Diana Wynne Jones, whose acclaim included the World Fantasy Award for Life Achievement. As Neil Gaiman stated, she was "quite simply the best writer for children of her generation."

The three books in the World of Howl are:

Other beloved series from Dianna Wynne Jones include the Chronicles of Chrestomanci and the Dalemark Quartet.