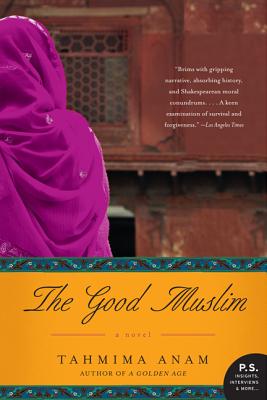 “Delicate, heart-wrenching and poetic, this is a novel ofgreat poise and power.” —Tash Aw, author of The Harmony Silk Factory

Set in Bangladesh at a time when Islamic fundamentalism ison the rise, The Good Muslim is an epic story about faith, familyand the long shadow of war. Tahmima Anam, the prize-winning author of A Golden Age, offers a moving portrait of a sister and brother whostruggle with the competing loyalties of love and belief as they cope with thelasting ravages of war and confront the deeply intimate roots of religiousextremism. Echoingthe intensity and humanity of Thrity Umrigar’s The SpaceBetween Us, Abraham Verghese’s Cutting for Stone, and Kiran Desai’s TheInheritance of Loss,Anam’s “accomplished and gripping novel,” in thewords of author Pankaj Mishra, “describes not only the tumult of a greathistorical event, but also the small but heroic struggles of individuals livingin the shadow of revolution and war.”


Praise For The Good Muslim: A Novel…

“Anam’s fluent prose and sharp insights are at their best when the narrative strays . . . into the surreal ways in which faith and love work-and sometimes fail.”
— The New Yorker

“Anam has an eye for culture, and for cultural dissonance. The writer’s gift is to make the unfamiliar understood. The Good Muslim succeeds in doing exactly that, and doing it well.”
— Denver Post

“Throughout the novel’s extremes of violence and tragedy, Anam always allows the ultimate humanity of the characters to shine through.”
— Kirkus Reviews

“Anam has a gift for tackling complex issues both personal and political.”
— Library Journal

“Gripping and beautifully written. . . . From historical, political, and social tragedy, Anam has fashioned a mesmerizing story capturing a culture and a time.”
— Publishers Weekly (starred review)

“Anam seems to be a novelist not so much luxuriating in the act of writing as in total control of it, using the right words to create her stunning story.”
— Arifa Akbar, The Independent

“Anam tells a poignant, little-known story of a country often lost in the maze of global politics.”
— Booklist

Who is “the good Muslim” of the title?

Maya and Sohail had dreams for their country, hopes that they risked their lives to achieve. What kind of country did they dream of—and what kind of country are they living in fifteen years later? Was their sacrifice worth the cost?

How does the war affect Maya and Sohail and their relationship? How does each react to their experience, and how do their choices shape the people they have become and how they see one another? What keeps them from telling the whole truth about their experiences? How might their lives be different if they had?

At the novel’s beginning, Maya runs a clinic in the countryside from which she is soon forced to flee. “It’s the doctor, she’s the cause of all the trouble,” she overhears one of the village men say. What “trouble” does Maya cause here and throughout the book? How culpable is she? Do you agree with her actions

What does faith, piety, and religion mean to Maya and Sohail? What role does it play in their lives before and after the war? At the novel’s end, Maya thinks that if their mother had given Sohail, “The Book” sooner, it may have prevented the tragedy of his life. What do you think?

Why doesn’t Sohail want to remember the past,—and why does Maya refuse to forget it?

What is the significance of Piya in both Sohail and Maya’s lives? Why did Piya choose to leave instead of staying with Sohail?

Describe Maya’s relationship with her nephew, Zaid. Should she have intervened sooner? Should she not have gotten involved at all? What responsibility does she bear for his fate? What about Sohail? Why does he send his only son to a madrassa? Why does he think that by doing so, he will prevent Zaid from growing up to become like him?

Compare and contrast Joy and Sohail. What were these young men to each other before the war and what is their relationship now? Why is Maya so resistant to Joy? Is love always a form of submission? Are her fears justified? How can she hold on to herself, her independence, her beliefs while being married?

What is life like for women in the Bangladesh of The Good Muslim? Compare their lives with those of American women. What do these sisters of east and west share? How are they different? Think about non-Muslim religious fundamentalism in the West. How does it compare with that of Muslim fundamentalists in Bangladesh and Pakistan, especially in regard to women and their role in society?

Do you think Sohail and Maya will ever truly reconcile?

Think about the structure of the novel. Tahmima Anam continually moves from past to present. How does this shape the narrative’s impact on the reader?