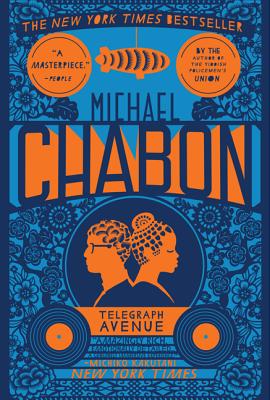 New York Times bestselling, Pulitzer Prize-winning novelist Michael Chabon has transported readers to wonderful places: to New York City during the Golden Age of comic books (The Amazing Adventures of Kavalier & Clay); to an imaginary Jewish homeland in Sitka, Alaska (The Yiddish Policemen’s Union); to discover The Mysteries of Pittsburgh. Now he takes us to Telegraph Avenue in a big-hearted and exhilarating novel that explores the profoundly intertwined lives of two Oakland, California families, one black and one white. In Telegraph Avenue, Chabon lovingly creates a world grounded in pop culture—Kung Fu, ’70s Blaxploitation films, vinyl LPs, jazz and soul music—and delivers a bravura epic of friendship, race, and secret histories.

“An amazingly rich, emotionally detailed story….[Chabon’s] people become so real to us, their problems so palpably netted in the author’s buoyant, expressionistic prose, that the novel gradually becomes a genuinely immersive experience—something increasingly rare in our ADD age.” — Michiko Kakutani, New York Times

“Chabon is an extraordinarily generous writer. He is generous to his characters, to his landscapes, to syntax, to words, to his readers—there is a real joy in his work….Both ambitious and lighthearted, the novel is a touching, gentle, comic meditation.” — Cathleen Schine, New York Review of Books

“Forget Joycean or Bellovian or any other authorial allusion. Telegraph Avenue might best be described as Chabonesque. Exuberantly written, generously peopled, its sentences go off like a summer fireworks show, in strings of bursting metaphor.” — Jess Walter, San Francisco Chronicle

“The writing - stylized, humorous and often dazzling - is inflected with tones of jazz and funk. But it’s Chabon’s ear for the sounds of the human soul that make this book a masterpiece, as his vividly drawn characters learn to live at the intersection of disappointment and hope.” — Robin Micheli, People (4 out of 4 stars)

“Telegraph Avenue is so exuberant, it’s as if Michael Chabon has pulled joy from the air and squeezed it into the shape of words....His sentences spring, bounce, set off sparklers, even when dwelling in mundane details….Fantastic.” — Carolyn Kellogg, Los Angeles Times Book Review

“Witty and compassionate and full of more linguistic derring-do than any other writer in American could carry off.” — Ron Charles, Washington Post

“A genuinely moving story about race and class, parenting and marriage…Chabon is inarguably one of the greatest prose stylists of all time, powering out sentences that are the equivalent of executing a triple back flip on a bucking bull while juggling chain saws and making love to three women.” — Benjamin Percy, Esquire

“Chabon’s hugely likable characters all face crises of existential magnitude, rendered in an Electra Glide flow of Zen sentences and zinging metaphors that make us wish the needle would never arrive at the final groove.” — Elle

“[Chabon] is a truly gifted writer of prose: He writes long, luxurious sentences that swoop and meander before circling back in on themselves, not infrequently approximating the improvisational jazz that Archy and Nat hold so dear.” — Associated Press

“A moving, sprawling, modern-day tale that uses the improvisational shifts and rhythms of jazz and soul to tell the story of two couples….With seeming ease, Chabon shifts from high-wire flourishes…to moments of crystalline simplicity.” — Robert Bianco, USA Today (4 out of 4 stars)

“Fresh, unpretentious, delectably written….For all his explorations into the contentious dynamics of family, race and community, Mr. Chabon’s first desire is simply to enchant with words. Eight novels in, he still uses language like someone amazed by a newly discovered superpower.” — Sam Sacks, Wall Street Journal

“A beautiful, prismatic maximalism of description and tone, a sly meditation on appropriation as the real engine of integration, and an excellent rationale for twelve-page sentences.” — Kelsey Dake, GQ

“He writes with such warmth and humor and sheer enthusiasm - for his characters, for the rhythms and atmosphere of Oakland, for geek culture, for the mysterious power of music, which he captures with uncommon descriptive virtuosity - that by the end it’s hard to resist this charmingly earnest book.” — Rob Brunner, Entertainment Weekly

“This is a novel rich in story and character, rich in its dialogue and descriptions, rich in spirit and invention - and full of sharp, funny writing….The spirit of Telegraph Avenue is one of union and reconciliation, a welcome, exuberant voice in our fractious times.” — David Walton, Cleveland Plain Dealer

“A buoyant novel, written with the author’s typical stylistic elegance and empathetic imagination….His prose is as energizing as ever, in part because he’s always willing to try high-risk maneuvers up on the figurative balance beam.” — Troy Patterson, Slate

“One of Chabon’s great gifts is an ability to beguile us with prose that exudes warmth into seeing ourselves in others, to even know them as ourselves. It’s a feat that parlays Telegraph Avenue, with its diverse population, into an All-American novel, one of the great ones.” — Sherryl Connelly, Daily News

“If any novelist can pack the entire American zeitgeist into 500 pages, it’s Chabon....Ambitious, densely written, sometimes very funny, and fabulously over the top, here’s a rare book that really could be the great American novel.” — Library Journal (starred review)

“’Virtuosity’ is the word most commonly associated with Chabon, and if Telegraph Avenue, the latest from Pulitzer Prize-winning author of The Yiddish Policeman’s Union, is at first glance less conceptual than its predecessors, the sentences are no less remarkable.” — Publishers Weekly

“Chabon has a near effortless ability to reveal the huge universal human truths that scaffold absurdly specific circumstances, and he does so on nearly every page here.” — Emily SImon, Buffalo News

“A sparkling, mesmerizing read….That’s what Chabon’s books do, sentence after sentence, page after page: they force you to bring your game up to his level….His writer’s eye makes the world a more vivid, vital place to live.” — Michael Bourne, The Millions

“An achingly poignant vibe of sweet and soulful idealism makes itself heard throughout Telegraph Avenue….It’s a dream worth imagining, and Chabon does so with skill, charm, and no small amount of virtuosic writing.” — Diane Cole, Jewish Week

“[Telegraph Avenue] has a Great American Novel heft to it—probably because, all caps aside, it is a great American novel.” — Kathryn Schulz, New York magazine

“Chabon not only knows how [his characters] feel, but how they talk. His dialogue is a thing to behold, the plot unrelenting. And I can’t imagine any writer, male or female, ever delivering a more breathtaking description of a woman giving birth. Some midwife, this Chabon.” — Dan Cryer, Newsday

“Displays both his sense of ordinary people’s inner lives and his rich, freewheeling prose….A dense, flavorful book about race, class, politics, culture and sexuality, as expansive and ambitious as anything Chabon has published to date….An essential, unforgettable read.” — Ben Pfeiffer, Kansas City Star

“His most mature, accessible fiction to date…An engrossing, well-crafted drama of family and friendship….Chabon’s storytelling gifts seem to know no bounds, and the dexterity with which he crafts his beautiful prose is often breathtaking.” — Jeremy Garber, The Oregonian

“A dazzling star turn of a novel that showcases Chabon’s writing talents like a digital TV screen above Times Square….Chabon does love popular culture, but he loves humanity more, and that love is the power behind this sweeping novel.” — Bob Hoover, Minneapolis Star Tribune

“Chabon’s inventiveness requires language dazzling and deft enough to put it across, and like most of his later work, Telegraph Avenue reads easy - I downed 300 pages flying back from Denmark, stopping only to eat and nap.” — Robert Christgau, barnesandnoble.com

“Michael Chabon is the Michael Jordan of American novelists….Telegraph Avenue could serve as a master class on how to write a novel.” — John Broening, Denver Post

“As ever, Chabon is a performing magician. He can take any topic and stage it so the crowd smiles and even oohs its amazement….Chabon makes a grab for the entire world in a single bighearted book.” — Darin Strauss, New York Times Book Review

There are many different variations on father-and-son relationships—both real and makeshift—explored in the novel. What might the author be trying to convey through these complicated liaisons?

The majority of the characters in the novel are members of some minority group—African American, Jewish, Asian. Would you say that Telegraph Avenue is fundamentally a novel about race?

Like her husband, Archy, Gwen is African American, but of a decidedly different social class, upbringing, and education. How do these differences affect her marriage, as well as her position in this close-knit Oakland community—both in her own view and in the view of others?

Telegraph Avenue, the real-life Bay Area street at the center of the story, is described as “the ragged fault where the urban plates of Berkeley and Oakland subducted.” How do the conflicting cultures of upper-middle-class Berkeley and working-class Oakland clash in the novel?

Why do Archy and Nat see the imminent arrival of ex-NFL quarterback Gibson Goode’s mega-mall as a threat not only to their record shop, but to the community at large?

As the legendary Berkeley Birth Partners, Gwen Shanks and Aviva Roth-Jaffe have worked together for many years, and their husbands are business partners as well. Beyond their professional lives, what sense do you get of the friendship between these two women? How does the crisis that confronts their business bring out the best and/or worst in their pairing?

When a home birth goes awry, the midwife Gwen goes ballistic when faced with criticism from an obstetrician at the hospital. The emotional outburst severely jeopardizes her career. Do you think she is justified in her reaction, or should she have tempered her response?

Telegraph Avenue is set during the summer of 2004 in Oakland, California. Do this time and place have special bearing on the events of the novel, or could the story take place in a different or more ambiguous setting?

An intriguing “character” in the novel is Fifty-Eight, the African grey parrot that belongs to Cochise Jones. What does its name mean and what do you think the bird might symbolize or represent?

Some of the characters in the novel seem to be holding onto the past, as evidenced by their love of vinyl records and 1970s “Blaxploitation” martial arts films. How do you think this attachment to the past affects the characters’ grasp on their present realities?

Archy Stallings makes some questionable choices in his dealings with his wife, Gwen, his son, Titus, his partner, Nat, and his business rival, Gibson Goode. Do you find him a sympathetic character?

How would you assess the relationship between Julius and Titus? Is it a genuine friendship for both of them?

To what extent are the characters in this novel in control of their own destinies, and how much does the inevitability of uncontrollable change come into play?

The novel is filled with colorful, eccentric characters. Which did you feel were the most arresting? The most real? Why?