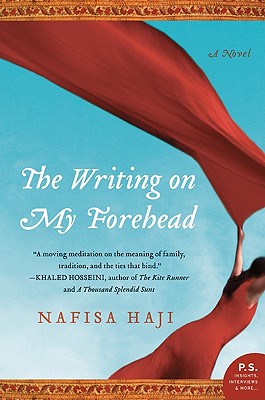 The Writing on My Forehead

“You must take some time and fall in love with the characters of Nafisa Haji's debut novel about Saira Qader, a rebellious journalist and a Muslim-American of Indo-Pakistani descent, and her family members, each with their own hopes and dreams. This is a rich novel, full of joys and sorrows, laughter and tears, rebellion and tenderness.”
— Sina Herkelrath, Kepler's Books & Magazine, Menlo Park, CA
View the List

A free-spirited and rebellious Muslim-American of Indo-Pakistani descent, willful, intelligent Saira Qader rejected the constricting notions of family, duty, obligation, and fate, choosing instead to become a journalist, making the world her home. But when tragedy strikes, throwing Saira's life into turmoil, the woman who circled the globe to uncover the details of other lives must confront the truths of her own. In need of understanding, she looks to the stories of those who came before—her grandparents, a beloved aunt, her mother and father. As Saira discovers the hope, pain, joy, and passion that defined their lives, she begins to face what she never wanted to admit: that choice is not always our own, and that faith is not merely an intellectual preference.


Praise For The Writing on My Forehead: A Novel…

“THE WRITING ON MY FOREHEAD is not only a family history but also a social history with an ambitious arc. Haji deftly illustrates how the Qaders’ lives intersect with defining world events. (Haji is a) talented new writer of sense and a distinct sensibility.”
— San Francisco Chronicle

“A brainy, beautiful braid of stories about three generations of a Muslim family. This book, if widely read, will go a long way toward deconstructing stereotypes about American Muslims, and that, on top of its value as a work of fiction, makes it a treasure.”
— Minneapolis Star Tribune

“THE WRITING ON MY FOREHEAD by Nafisa Haji explores how a family’s history––one spanning continents, love affairs, and political revolutions––can both haunt and heal.”
— Parade (Parade Pick)

“(A) deeply moving and beautifully written novel about different generations of an Indo-Pakistani family takes the reader on an emotional journey into how family and traditions define us and our choices in life. It’s a fast read, but its deeper meaning resonates long after the last page.”
— Associated Press

“This impressive debut follows the life of Saira Qader, a Muslim American of Indo-Pakistani descent who rejects the cultural traditions of family and duty to become a world-roving journalist.”
— Sacramento Bee

“Just as Saira’s mother tenderly traced the words of protective prayers on her daughters’ foreheads each night, so too does this book leave a stamp on us. As we open ourselves to this culture, it becomes inscribed within us, as if its rich history was written onto our foreheads.”
— Chattanooga Times Free Press

“Grab a cup of chai (tea), and curl up in a big chair to read; time will fly and you’ll want to refill your cup before you even think about putting this book down. (The story) will stay with you for a long while.”
— Wichita Falls, TX, Times Record News

““An elegantly written look at family dynamics and how cultural traditions shape lives. Poses questions and doesn’t give all the answers, allowing the reader to draw his or her own conclusions and continue the dialogue long after finishing the book.”
— Deseret News

“A moving meditation on the meaning of family, tradition, and the ties that bind. Lyrical and touching. A story of mother and daughters, and of a young Muslim woman at crossroads, shaped by the forces of her past, her religion, her roots, her culture, and her own determined will.”
— Khaled Hosseini, The Kite Runner and A Thousand Splendid Suns

“(An) impressive debut. Haji achieves an effortless commingling of family and social history in this intricate story that connects a young woman and her family over continents and through generations.”
— Publishers Weekly

“The struggles of second-generation immigrants are well presented, calling to mind novels like Monica Ali’s Brick Lane. In addition, the climax is powerful and satisfying, as Saira belatedly comes to recognize the inescapable tug of family. Recommended for all libraries.”
— Library Journal

Nafisa Haji's first novel, The Writing on My Forehead, was a finalist for the Northern California Independent Booksellers Association Book of the Year Award. An American of Indo-Pakistani descent, she was born and raised in Los Angeles and now lives in northern California with her husband and son.

On the husband-hunting journey to Pakistan, Saira’s mother evokes the fatalistic notion of kismat or destiny and fortune. Discuss the ways in which her mother’s efforts to find Saira a husband contradict this idea.


With regard to the concept of kismat, how does it contrast with the force of personal will in Saira’s story? How about in the lives of Big Nanima, Nanima, and Ameena?


The verse of the Quran which was the writing on Saira’s forehead refers to “what lies before and what lies after.” How does this relate to the idea of destiny? How does it relate to the events of the novel?


The author has said that Sakina’s role in the novel, for some Muslims, might be considered a metaphor for Islam in post 9/11 America. Discuss what the author may have meant by this.


What is the underlying contradiction between the professional course that Saira takes and the personal choices she has made in her private life?


Discuss the response to 9/11 that takes place in the Karachi living room of Saira’s aunt as it compares to the way it was experienced in the United States.


How does the solution offered by the aunties at the end of the novel relate back to the tension between personal freedom and social duties and obligations that is one of the themes of the novel? Discuss Saira’s options and what direction she might take.


How does Saira’s dream foreshadow and then complete the arc of the plot in this novel? The position of the gun is different in the closing dream—what do you think this signifies?


Social and political history provides the backdrop for the lives of all the characters in the novel. Discuss the interplay between public events and private lives as they unfold in the novel.