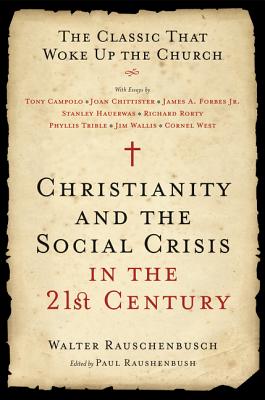 Christianity and the Social Crisis in the 21st Century

The Classic That Woke Up the Church

Published at the beginning of the twentieth century, Christianity and the Social Crisis is the epoch-making book that dramatically expanded the church’s vision of how it could transform the world. The 100th anniversary edition updates this classic with new essays by leading preachers and theologians.


Praise For Christianity and the Social Crisis in the 21st Century: The Classic That Woke Up the Church…

“A book which left an indelible imprint on my thinking.”
— Rev. Dr. Martin Luther King, Jr.

Republication in this form is a forceful intervention in contemporary debates in American religion and politics.
— Commonweal

Many of the societal concerns and questions of 1907, e.g., his alarm over iner-city poverty, societal injustice, crime, and ineffectual government, are just as relevant today.
— Library Journal

“Skillfully fashioned and perfectly timed, [Rauschenbusch’s] book was a supercharger for a movement . . . and set a new standard for political theology. Rightly viewed from the beginning as the greatest statement of the social gospel movement.”
— Christian Century

In a 100th-anniversary edition, Paul Raushenbush, the author’s great-grandson, has reprinted the text with essays by Cornel West, the Rev. Jim Wallis and others to prove that one can be a dedicated Christian and a social reformer at the same time.
— The New York Times Book Review

Rightly viewed from the beginning as the greatest statement of the social gospel movement . . . and set a new standard for political theology.
— Christian Century

Walter Rauschenbusch (1861-1918) was the leading proponent of the Social Gospel Movement whose mission was to reform society to meet the social needs of the poor through the ministrations of the institutional church. PBS recently called him "one of the most influential American religious leaders of the last 100 years."