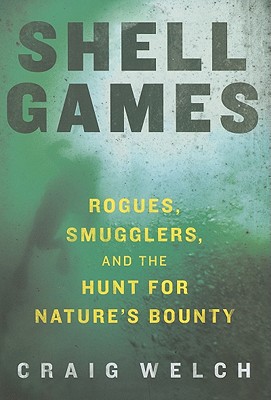 Rogues, Smugglers, and the Hunt for Nature's Bounty

A unique blend of natural history and crime drama, Shell Games by Craig Welch is a riveting tale of rogues, scoundrels, and the hunt for nature’s bounty in the tradition of The Orchid Thief. A stranger-than-fiction true story centered around a larger-than-life character who pursued a larger-than-life clam—the Geoduck—and then led wildlife police on a two-year-long chase, Shell Games is enthralling and remarkable from page one on.


Praise For Shell Games: Rogues, Smugglers, and the Hunt for Nature's Bounty…

“[A]n engrossing tale of both human excesses and the attempts of a few brave souls’ to curb them. Everyone, not just the denizens of Puget Sound, has a stake in this battle’s outcome.”
— Washington Post

“Welch brings us into the underworld of shellfish smuggling from multiple angles...Shell Games is an eye-opener, exposing a murky world operating just below the surface.”
— Oregonian

“With hit men, snitches, and midnight smuggling runs, this book has all the adventure of a Miami Vice episode. That it reads like a detective novel - with the quarry being millions of dollars of freakishly large clams - is testament to the formidable writing and reporting talents of Craig Welch.”
— Mark Obmascik, author of The Big Year and 2009 National Outdoor Book Award winner for Halfway to Heaven: My White-knuckled - and Knuckleheaded - Quest for the Rocky Mountain High

Craig Welch is the environmental writer for the Seattle Times, a fellow at Harvard University's Nieman Foundation for Journalism, and a two-time winner of the Society of Environmental Journalists' top prize for beat reporting.