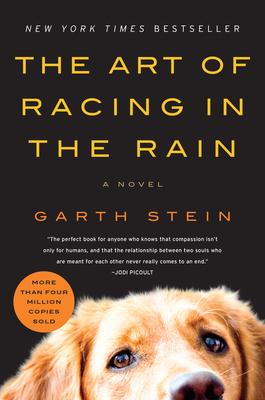 The New York Times bestselling novel from Garth Stein—a heart-wrenching but deeply funny and ultimately uplifting story of family, love, loyalty, and hope—a captivating look at the wonders and absurdities of human life . . . as only a dog could tell it.

“The perfect book for anyone who knows that compassion isn’t only for humans, and that the relationship between two souls who are meant for each other never really comes to an end. Every now and then I’m lucky enough to read a novel I can’t stop thinking about: this is one of them.” —Jodi Picoult

“This old soul of a dog has much to teach us about being human. I loved this book.” —Sara Gruen

Enzo knows he is different from other dogs: a philosopher with a nearly human soul (and an obsession with opposable thumbs), he has educated himself by watching television extensively, and by listening very closely to the words of his master, Denny Swift, an up-and-coming race car driver. Through Denny, Enzo has gained tremendous insight into the human condition, and he sees that life, like racing, isn’t simply about going fast. Using the techniques needed on the race track, one can successfully navigate all of life’s ordeals.

On the eve of his death, Enzo takes stock of his life, recalling all that he and his family have been through: the sacrifices Denny has made to succeed professionally; the unexpected loss of Eve, Denny’s wife; the three-year battle over their daughter, Zoë, whose maternal grandparents pulled every string to gain custody. In the end, despite what he sees as his own limitations, Enzo comes through heroically to preserve the Swift family, holding in his heart the dream that Denny will become a racing champion with Zoë at his side.

A heart-wrenching but deeply funny and ultimately uplifting story of family, love, loyalty, and hope, The Art of Racing in the Rain is a beautifully crafted and captivating look at the wonders and absurdities of human life…as only a dog could tell it.

“One of those stories that may earn its place next to Richard Bach’s Jonathan Livingston Seagull, Paulo Coelho’s The Alchemist, and Yann Martel’s Life of Pi.” — Portland Oregonian

“The perfect book for anyone who knows that some of our best friends walk beside us on four legs; that compassion isn’t only for humans; and that the relationship between two souls...meant for each other never really comes to an end.” — Jodi Picoult

“The Art of Racing in The Rain has everything: love, tragedy, redemption, danger, and—most especially—the canine narrator Enzo. This old soul of a dog has much to teach us about being human. I loved this book.” — Sara Gruen, Author of Water for Elephants

“The Art of Racing in The Rain has everything: love, tragedy, redemption, danger, and--most especially--the canine narrator Enzo. This old soul of a dog has much to teach us about being human.” — Sara Gruen, Author of Water for Elephants

“I savored Garth Stein’s The Art of Racing in the Rain for many reasons: a dog who speaks, the thrill of competitive racing, a heart-tugging storyline, and--best of all--the fact that it is a meditation on humility and hope in the face of despair.” — Wally Lamb, Author of She's Come Undone and I Know This Much Is True

1. Some early readers of the novel have observed that viewing the world through a dog’s eyes makes for a greater appreciation of being human. Why do you think this is?

2. Enzo’s observations throughout the novel provide insight into his world view. For example: “The visible becomes inevitable.” “Understanding the truth is simple. Allowing oneself to experience it, is often terrifically difficult.” “No race has ever been won in the first corner; many races have been lost there.” How does his philosophy apply to real life?

3. In one of the book’s darkest moments, one of Zoe’s stuffed animals—the zebra—comes to life and torments him. What does the zebra symbolize?

4. Can you imagine the novel being told from Denny’s point of view? How would it make the story different?

5. In the first chapter, Enzo says: “It’s what’s inside that’s important. The soul. And my soul is very human.” How does Enzo’s situation—a human soul trapped in a dog’s body—influence his opinions about what he sees around him? How do you feel about the ideas of reincarnation and karma as Enzo defines them?

6. Do you find yourself looking at your own dog differently after reading this novel?

7. In the book, we get glimpses into the mindset and mentality of a race car driver. What parallels can you think of between the art of racing and the art of living?

8. The character of Ayrton Senna, as he is presented in the book, is heroic, almost a mythic figure. Why do you think this character resonates so strongly for Denny?