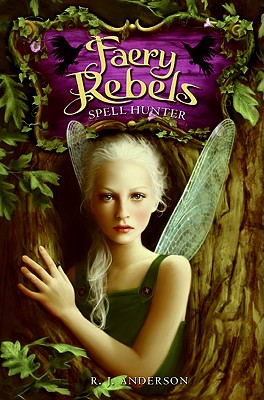 Forget everything you think you know about faeries. . . .

Creatures full of magic and whimsy?

Not in the Oakenwyld. Not anymore.

Deep inside the great Oak lies a dying faery realm, bursting with secrets instead of magic. Long ago the faeries mysteriously lost their magic. Robbed of their powers, they have become selfish and dull-witted. Now their numbers are dwindling and their very survival is at stake.

Only one young faery—Knife—is determined to find out where her people's magic has gone and try to get it back. Unlike her sisters, Knife is fierce and independent. She's not afraid of anything—not the vicious crows, the strict Faery Queen, or the fascinating humans living nearby. But when Knife disobeys the Faery Queen and befriends a human named Paul, her quest becomes more dangerous than she realizes. Can Knife trust Paul to help, or has she brought the faeries even closer to the brink of destruction?

Talented newcomer R. J. Anderson creates an extraordinary new fantasy world and weaves a gripping tale of lost magic, high adventure, and surprising friendship in which the fate of an entire realm rests on the shoulders of one brave faery rebel.

“A highly readable, sophisticated tale of romance and self–sacrifice. Readers will hope for more from this talented new author.”
-ALA Booklist

“Anderson creates a fascinating world. This compelling story is full of adventure and mystery.”
-Voice of Youth Advocates (VOYA)

“Readers will be racing through the pages right along with Knife to discover the fate of her world and her love.”
-Bulletin of the Center for Children’s Books

“Anderson is a gifted writer with a sure touch for both characterization and plot, and Knife is an absolutely fantastic protagonist – fiercely independent and curious. This book is a page–turning romp.”
-Romantic Times

“This is the best kind of fantasy: a book that makes faeries wonderfully real and maybe even living in our own backyards.”
-Sarah Prineas, author of THE MAGIC THIEF

“FAERY REBELS: SPELL HUNTER has the charm of Mary Norton’s THE BORROWERS and the edge of Holly Black’s TITHE.”
-Megan Whalen Turner, author of the Newbery Honor Book THE THIEF

“Knife is just my kind of heroine—strong and independent, with a huge helping of curiosity to get her into trouble, and the bravery and intelligence to get out of trouble again and again.”
-Patricia C. Wrede, author of the Enchanted Forest Chronicles