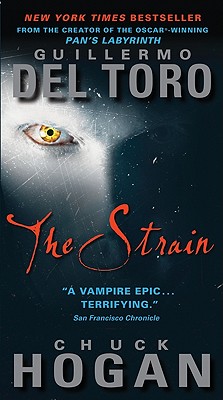 In one week, Manhattan will be gone.

At New York's JFK Airport an arriving Boeing 777 taxiing along a runway suddenly stops dead. All the shades have been drawn, all communication channels have mysteriously gone quiet. Dr. Eph Goodweather, head of a CDC rapid-response team investigating biological threats, boards the darkened plane . . . and what he finds makes his blood run cold.

A terrifying contagion has come to the unsuspecting city, an unstoppable plague that will spread like an all-consuming wildfire—lethal, merciless, hungry . . . vampiric.

And in a pawnshop in Spanish Harlem an aged Holocaust survivor knows that the war he has been dreading his entire life is finally here . . .


Praise For The Strain…

“[One of] the most original and powerful filmmakers working today.”
-The Hollywood Reporter

“His distinctive creatures and otherwordly parables use the realms of fantasy to explore fundamental human issues such as love, alienation, weakness and, of course, fear… [He is] a master of monsters.”
-USA Today

“A cinematic magician who has never lost his childlike sense of wonder.”
-Peter Jackson and Fran Walsh in Associated Press

“He elevated gothic horror to art. . . . Bilingual, bicultural, multigenre, he has a voice that feels both fresh and ancient.”
-Entertainment Weekly