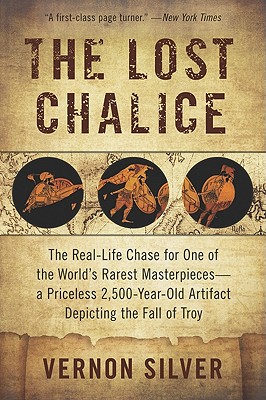 The Real-Life Chase for One of the World's Rarest Masterpieces—a Priceless 2,500-Year-Old Artifact Depicting the Fall of Troy

An Oxford-trained archaeologist and award-winning journalist based in Rome, Vernon Silver brings us The Lost Chalice, the electrifying true story of the race to secure a priceless, 2,500-year-old cup depicting the fall of Troy—a lost treasure crafted by Euphronios, an artist widely considered “the Leonardo Da Vinci of ancient Greece.” A gripping, real life mystery, The Lost Chalice gives readers a behind-the-scenes look at the inner workings of great museums and antiquities collections—exposing a world of greed, backstabbing, and double-dealing.

Vernon Silver's distinguished reporting on art and culture has appeared in the New York Times, the Boston Globe, Spy magazine, and other publications. An Oxford-trained archaeologist and award-winning journalist, he studied Egyptology at the American University in Cairo and is a senior writer at Bloomberg News in Rome.