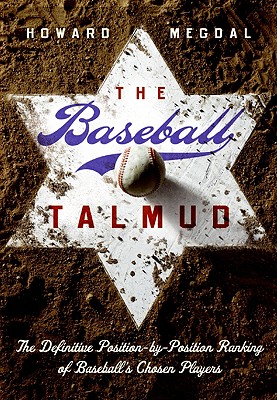 From the icons of the game to the players who got their big break but never quite broke through, The Baseball Talmud provides a wonderful historical narration of Major League Jewish Baseball in America. All the stats, the facts, the stories, and the (often unheralded) glory.

The Baseball Talmud reveals that there is far more to Jewish baseball than Hank Greenberg's powerful slugging and Sandy Koufax's masterful control. From Ausmus to Zinn, Berg to Kinsler, Holtzman to Yeager, and many others, Megdal draws upon the lore and the little-known details that increase our enjoyment of the game, including:

But this is more than just stories. Megdal, a stat geek himself, uses the wealth of modern sabermetrics to determine the greatest Jewish players at each position, the all-time Jewish All-Star Team, and how they would rate against the greatest teams in baseball history, from the 1906 Chicago Cubs to the 1998 New York Yankees.

The Baseball Talmud rewrites the history of Jewish baseball and is a book that every baseball fan should own.


Praise For The Baseball Talmud: The Definitive Position-by-Position Ranking of Baseball's Chosen Players…

“In the spirit of a lavish bar mitzvah, The Baseball Talmud skimps on nothing. They’re all here—the greats, the unknowns, the descendants of Abraham and the recently converted. This is the book Bill James would have written—if he were Jewish.”
— Jeremy Schaap, ESPN reporter and author of Cinderella Man

“What is there to say about a book that, among its many merits, invents the “value-added Judaism” statistic? With high humor and a strong grasp of his facts, Howard Megdal answers questions and addresses issues that Jewish fans have long wondered about—and fans of other faiths will also enjoy.”
— John Eisenberg, author of The Great Match Race

“Howard Megdal’s witty and informative book gives the definitive rabbinic commentary on the 160—Who knew?—Jews who played in the Major Leagues. These guys could pitch, field and hit. Plus, they loved their mothers.”
— L. Jon Wertheim, Senior Writer, Sports Illustrated and author of Running the Table and Blood in the Cage

Howard Megdal covers baseball for the New York Observer. He is a regular contributor to New York Baseball Digest and Inside Pitch, and has written for ESPN.com and numerous other publications. Megdal cohosts the radio program New York Baseball Live with Mike Silva. Megdal's daily haiku recapping each Mets game can be read on Metsgeek.com. He lives in New York.