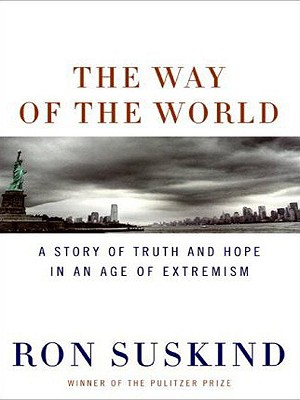 The Way of the World LP

From Pulitzer Prize-winning journalist and bestselling author Ron Suskind comes a startling look at how America lost its way and at the nation's struggle, day by day, to reclaim the moral authority upon which its survival depends. From the White House to Downing Street, from the fault-line countries of South Asia to the sands of Guantanamo, Suskind offers an astonishing story that connects world leaders to the forces waging today's shadow wars and to the next generation of global citizens. Tracking down truth and hope within the Beltway and far beyond it, Suskind delivers historic disclosures with this emotionally stirring and strikingly original portrait of the post-9/11 world.

In a sweeping, propulsive, and multilayered narrative, The Way of the World investigates how America relinquished the moral leadership it now desperately needs to fight the real threat of our era: a nuclear weapon in the hands of terrorists. Truth, justice, and accountability become more than mere words in this story. Suskind shows where the most neglected dangers lie in the story of "The Armageddon Test" --a desperate gamble to send undercover teams into the world's nuclear black market to frustrate the efforts of terrorists trying to procure weapons-grade uranium. In the end, he finally reveals for the first time the explosive falsehood underlying the Iraq War and the entire Bush presidency.

While the public and political realms struggle, The Way of the World simultaneously follows an ensemble of characters in America and abroad who are turning fear and frustration into a desperate--and often daring--brand of human salvation. They include a striving, twenty-four-year-old Pakistani emigre, a fearless UN refugee commissioner, an Afghan teenager, a Holocaust survivor's son, and Benazir Bhutto, who discovers, days before her death, how she's been abandoned by the United States at her moment of greatest need. They are all testing American values at a time of peril, and discovering solutions--human solutions--to so much that has gone wrong.

For anyone hoping to exercise truly informed consent and begin the process of restoring the values and hope--along with the moral clarity and earned optimism--at the heart of the American tradition, The Way of the World is a must-read.


Praise For The Way of the World LP: A Story of Truth and Hope in an Age of Extremism…

“The leading chronicler of the forty-third president.”
-Esquire

“A bombshell book.”
-The Today Show

“Extraordinary. . . . If Mr Suskind is correct, laws have been broken and President George W. Bush and/or Dick Cheney are implicated. . . . This is—or ought to be—a Watergate-sized scandal.”
-Clive Crook, The Financial Times

“Startling. . . . Chilling. . . . A reportorial feat. . . . Suskind skillfully traces several interwoven stories of cultural clashes and cross-pollination, all of them pursuing the questions of whether America and the Muslim world can ever look past their differences and find understanding.”
-Michael Crowley, The New York Times Book Review

“Complex, ambitious, provocative, risky. . . . In a crowded, highly talented field, Mr. Suskind bids fair to claim the crown as the most perceptive, incisive, dogged chronicler of the inner workings of the Bush administration.”
-Mark Danner, The New York Times

“Ron Suskind has traced the history of the Bush years with a novelist’s ear. Now he looks at the tragedy through the eye of the victims.”
-The American Prospect

“A vivid snapshot of a year, 2006-2007, in the life of a nation whose leaders have betrayed its high moral purpose. One of Suskind’s Washington players cries into the darkness, “Can the great beast self-correct?” Can America, Suskind asks, recover its missionary rectitude? He clearly thinks it can.”
-The Sunday Times (London)

“Incisive. . . . No journalist has more ably explored the dark crevices of the Bush administration’s foreign policy. . . . Suskind has shown that faith -- the wrong kind of faith, anyway -- can produce disaster.”
-Salon

“Outstanding. . . . A searching, globe-hopping masterpiece of investigative journalism and empathetic prose. Amidst the ‘arabesque’ of richly drawn characters, Suskind reveals a few bombshell discoveries regarding the Bush Administration’s irresponsibility and outright lies.”
-The Huffington Post

“A touching story. . . . Suskind is a skilled reporter. . . The moral of Suskind’s story, in short, is that nothing suceeds like truthfulness.”
-The Washington Post Book World

“Suskind is a brilliant reporter and his investigation into the post- 9/11, pre-Iraq war period makes you think you’re reading about it for the first time. . . . It’s damning. Give this man another Pulitzer Prize.”
-Christopher Buckley, The Daily Beast

“An ambitious attempt to weave all the strands of our current conflict into a unified whole. . . . Ron Suskind’s new book has earned buzz because of his arresting argument that the Bush administration actually forged evidence to buttress its case for war.”
-Andrew Sullivan

“Suskind’s reporting continues to make him an indispensable chronicler of the Bush/Cheney debacle.”
-Tim Rutten, The Los Angeles Times

“There is much more to learn from Suskind’s reporting, including new evidence that Bush and other officials knew there were no WMD in Iraq.”
-Joe Conason, Salon

“Ron Suskind does not think small. . . . A sweeping examination of moral authority in a global world and how a post-9/11 America seems to have lost its way.”
-The Boston Globe

“Moving. . . . Mr. Suskind is a prodigiously talented craftsman. . . . It’s all here: a cast of characters that sprawls across class and circumstance to represent the totality of a historical moment. . . . These hard times, Mr. Suskind’s book suggests, call for a nonfiction Dickens.”
-The New York Observer