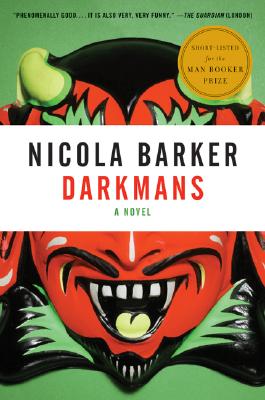 Shortlisted for the Man Booker Prize, Darkmans is an exhilarating, extraordinary examination of the ways in which history can play jokes on us all... If History is just a sick joke which keeps on repeating itself, then who exactly might be telling it, and why? Could it be John Scogin, Edward IV's infamous court jester, whose favorite pastime was to burn people alive - for a laugh? Or could it be Andrew Boarde, Henry VIII's physician, who kindly wrote John Scogin's biography? Or could it be a tiny Kurd called Gaffar whose days are blighted by an unspeakable terror of - uh - salad? Or a beautiful, bulimic harpy with ridiculously weak bones? Or a man who guards Beckley Woods with a Samurai sword and a pregnant terrier?

Darkmans is a very modern book, set in Ashford [a ridiculously modern town], about two very old-fashioned subjects: love and jealousy. It's also a book about invasion, obsession, displacement and possession, about comedy, art, prescription drugs and chiropody. And the main character? The past, which creeps up on the present and whispers something quite dark - quite unspeakable - into its ear.

The third of Nicola Barker's narratives of the Thames Gateway, Darkmans is an epic novel of startling originality.

Nicola Barker is one of Britain's most original and exciting literary talents. She is the author of two short-story collections: Love Your Enemies [winner of the David Higham Prize and the Macmillan Silver Pen Award] and Heading Inland [winner of the John Llewellyn Rhys Prize]. Her previous novels are Reversed Forecast, Small Holdings, Wide Open Behindlings and Clear, the last of which was long-listed for the 2005 Booker Prize. Her work is translated into twenty languages, and in 2000, she won the IMPAC Award for Wide Open. In 2003, Nicola Barker was named a Granta Best of British Novelist. She lives in London.