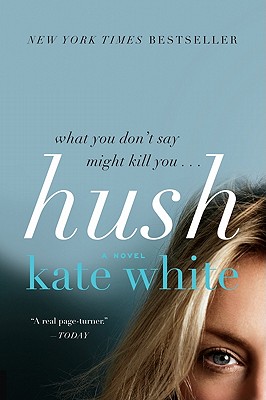 In Hush, New York Times bestselling author of the Bailey Weggins mystery series and many standalone novels, Kate White has penned an exciting thriller sure to keep readers interested until the last page.

Hush follows, Lake Warren, when she learns that her husband Jack is suing for full custody of their two kids, four months after their separation, she’s pretty certain that things can’t get any worse. The upside is that she’s working with the Advanced Fertility Center as a marketing consultant, alongside the attractive, flirtatious Dr. Keaton. But when, the morning after their one-night stand, she finds Keaton with his throat slashed, Lake learns that things can indeed become worse-they can become deadly.

So as not to jeopardize her case for custody, Lake is forced to lie to the police. Having just been intimate with a man who has been murdered, and wanting to protect herself from being charged with the crime, she begins her own search for the truth. But when the police start looking at her closely, people at the clinic start treating her with hostility, and strange and dangerous clues begin dropping-quite literally-on her doorstep, Lake realizes that she is dangerously close to dark secrets about Keaton and the clinic.

The real question is, can Lake stop what she’s started before it’s too late?


Praise For Hush: A Novel…

“Murder and lust make for a page-turner.”
— Harper's Bazaar

“A stand-alone thriller that generates a real sense of jeopardy while avoiding clichés. . . . A subplot about the clinic’s questionable practices adds to the tension, but doesn’t detract from the main plot with its myriad twists.”
— Publishers Weekly

“In her first stand-alone thriller, White effectively blends mommy-lit issues with murder and suspense. . . . The mix of family pressures and murderous suspense makes this a page-turner.”
— Library Journal

“A nerve-jangling adrenaline rush! From the first sentence to the last, Kate White catapults you into a tense vortex of deceit, danger, and double-crosses, where one wrong word is all it takes to lose everything. When in doubt, hush...”
— Lisa Gardner, author of The Neighbor

“Dark, sexy, and smart, HUSH is a pulse-pounding thriller that’s both chilling and provocative. Once you start reading, you won’t be able to stop - or guess who or why - until the very end. A stunningly good read.”
— Linda Fairstein, author of Hell Gate

“Sexy and suspenseful, Kate White’s HUSH is a true page-turner. The subtle twists and turns on the glamorous streets of New York City are going to thrill White’s longtime fans and earn her a legion of brand new readers. A clever, fast-paced thriller!”
— Lisa Unger, author of Die for You and Beautiful Lies

“Kate White places her wily heroine in a real jam, then keeps her, as well as readers, asking ‘Whodunit?’ right up till the gripping finale.”
— Sandra Brown, author of Rainwater