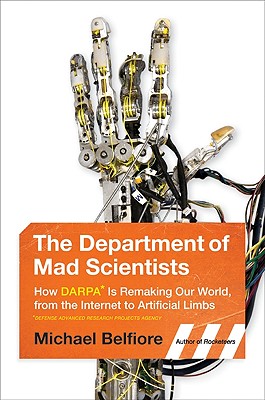 The Department of Mad Scientists (Hardcover)

How DARPA Is Remaking Our World, from the Internet to Artificial Limbs

The first-ever inside look at DARPA—the Defense Advanced Research Projects Agency—the maverick and controversial group whose futuristic work has had amazing civilian and military applications, from the Internet to GPS to driverless cars

America's greatest idea factory isn't Bell Labs, Silicon Valley, or MIT's Media Lab. It's the secretive, Pentagon-led agency known as DARPA. Founded by Eisenhower in response to Sputnik and the Soviet space program, DARPA mixes military officers with sneaker-wearing scientists, seeking paradigm-shifting ideas in varied fields—from energy, robotics, and rockets to peopleless operating rooms, driverless cars, and planes that can fly halfway around the world in just hours. DARPA gave birth to the Internet, GPS, and mind-controlled robotic arms. Its geniuses define future technology for the military and the rest of us.

Michael Belfiore was given unprecedented access to write this first-ever popular account of DARPA. Visiting research sites across the country, he watched scientists in action and talked to the creative, fearlessly ambitious visionaries working for and with DARPA. Much of DARPA's work is classified, and this book is full of material that has barely been reported in the general media. In fact, DARPA estimates that only 2 percent of Americans know much of anything about the agency. This fascinating read demonstrates that DARPA isn't so much frightening as it is inspiring—it is our future.


Praise For The Department of Mad Scientists: How DARPA Is Remaking Our World, from the Internet to Artificial Limbs…

If you want to know who really invented the Internet, or how brain waves can control robotic limbs, or how smart cars will become brilliant, this is your book. A must-read for those interested in invention in the modern age
-Joe Pappalardo, Popular Mechanics

“A fascinating introduction to a veritable pantheon of geek gods who quietly shaped the face of modern technology.”
-Daniel H. Wilson, roboticist and author of How to Survive a Robot Uprising

“An entertaining and information rich account of a small, efficient government agency that often turned 20th century sci-fi into 21st century technical reality. Belfiore will inspire young readers of a scientific bent to flood DARPA with their resumes.”
-Robert Wallace, author of SPYCRAFT: The Secret History of the CIA's Spytechs from Communism to al-Qaeda

[DARPA’s] history has never been told at the level of detail and with such mastery as in this book by Michael Belfiore
-Leonard Kleinrock, Distinguished Professor of Computer Science, UCLA, and Internet pioneer

“An expansive look at one of the most important agencies not only in the Department of Defense, but in American history.”
-Nathan Hughes, Military Analyst, STRATFOR

PRAISE FOR ROCKETEERS:“Belfiore excels at painting the world of NewSpace.”
-New Scientist

“A riveting, you-are-there account of how this ragtag collection of innovative thinkers, brave pilots, and bold visionaries is--right now--launching one of the most exciting new industries in history. Belfiore’s eloquent writing and exhaustive reporting really bring this mysterious, secretive world to life.”
-Popular Science

“That this story is still unfolding makes it especially exciting to read. These men are still in their workshops, tinkering their way into orbit.”
-Forbes

“The commerical space race is heating up so fast you need a cheat sheet to keep track of all the billionaires and gamblers vying to be the first private entrepreneur to blast paying customers into orbit. [Belfiore] does a stellar job introducing an intriguing cast of characters.”
-Wired

“The privitization of space travel is an essential step toward realizing our cosmic destiny. In his engaging, highly readable ROCKETEERS, Michael Belfiore tells the fascinating story of the entrepreneurs who have already made it happen.”
-Buzz Aldrin