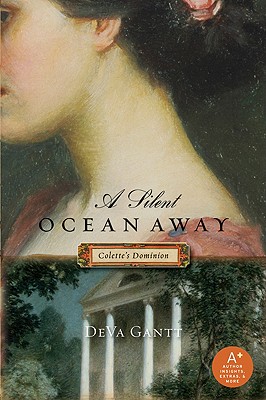 A Silent Ocean Away (Paperback)

Charmaine Ryan knows only poverty and pain growing up. In the wake of a horrifying tragedy, she seeks a new life, and fate leads her into the private world of the wealthy Duvoisin clan. At first, it seems as if nothing terrible could touch this seemingly charmed family. But an ill wind blows through the halls and chambers of the Duvoisins' sprawling island retreat, carrying betrayal, deceit, and ominous peril.

Quickly, Charmaine is caught up in the secrets and mystique swirling around the enigmatic family. At the center are shipping tycoon Frederic Duvoisin and his youthful wife, Colette. And there is Paul Duvoisin, a dashing seducer and Frederic's bastard son, who stirs a dangerous fascination in the two women; the scheming Agatha Ward, who will not rest until she's taken Colette's place in Frederic's heart as well as in his bed; and exiled son, John, who reenters the family fold, stoking the turmoil as he unveils truths best kept hidden. Ultimately, Charmaine chooses to stand with Colette against formidable enemies, but has she made the right decision?

A sweeping, remarkable blend of adventure, romance, intrigue, and suspense, A Silent Ocean Away heralds the arrival of a glorious new voice on the historical fiction scene.

DeVa Gantt is the pseudonym for coauthor sisters Debra and Valerie Gantt, career women, homemakers, and mothers. They are the authors of two previous books in the Duvoisin family saga, A Silent Ocean Away and Decision and Destiny.

A Silent Ocean Away opens with a solitary man immersed in despair. Who is this man? What has led him to such despair? For what is he praying?

Charmaine travels to the Caribbean and Charmantes in pursuit of a new and happier life. Has she successfully escaped her past? Why or why not?

Great stories emerge from conflict. Likewise, the more complex a story, the more difficult it becomes to differentiate between virtue and evil (the good and the bad). Into which category do the following characters fall? Charmaine? Paul? George? Colette? Frederic? Agatha? John?

Foreshadow is a powerful literary tool. In the beginning of Chapter 6, Pierre recounts his dream of meeting his mother in heaven. How is this dream foreshadow? Can you locate other passages of foreshadow?

Symbolism is an equally powerful literary tool. On the night John returns home, the storm is symbolic. How do the thunder and lightning mimic and personify John and Paul? Can you find other elements of symbolism?

Reviewers have called A Silent Ocean Away a gothic tale in line with Jane Eyre. Do you agree? Which aspects of the story might be considered gothic?

Each character introduced in A Silent Ocean Away is complex, credible, and imperfect. Do flawed characters make for a better story? Why or why not? Which character(s) have you found most interesting? Why is that?

The open-endedness of A Silent Ocean Away leaves the reader guessing. Even so, there are many clues cueing the reader in to what will happen in Book 2 – Decision and Destiny. Predict or comment on the following: Charmaine’s future; Paul’s affections; John’s anger; Agatha’s desires,
Frederic’s motives