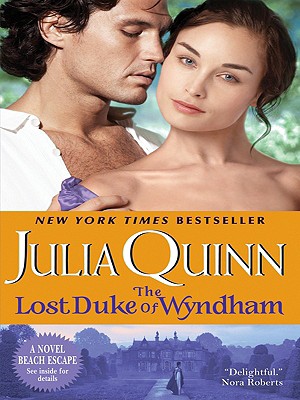 The Lost Duke of Wyndham (Paperback)

Jack Audley has been a highwayman.

A soldier. And he has always been a rogue. What he is not, and never wanted to be, is a peer of the realm, responsible for an ancient heritage and the livelihood of hundreds. But when he is recognized as the long-lost son of the House of Wyndham, his carefree life is over. And if his birth proves to be legitimate, then he will find himself with the one title he never wanted: Duke of Wyndham.

Grace Eversleigh has spent the last five years toiling as the companion to the dowager Duchess of Wyndham. It is a thankless job, with very little break from the routine . . . until Jack Audley lands in her life, all rakish smiles and debonair charm. He is not a man who takes no for an answer, and when she is in his arms, she's not a woman who wants to say no. But if he is the true duke, then he is the one man she can never have . . .

With tens of millions of copies in print, #1 New York Times bestselling author Julia Quinn has been called “Smart, funny,” by TIME Magazine. Her novels have been translated into 33 languages and are beloved the world over. A graduate of Harvard and Radcliffe Colleges, she lives with her family in the Pacific Northwest.


Praise For The Lost Duke of Wyndham…

“All of the signature elements that delight Quinn’s legions of dedicated readers—her wit, wonderfully entertaining characters, and sensual love story—are neatly in place in the first of a pair of delicious historical romances.”
— Booklist
or support indie stores by buying on
Copyright © 2020 American Booksellers Association