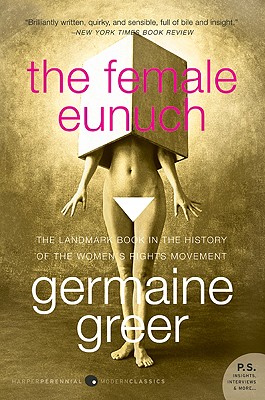 “Like a woman, this book gets better with age. Greer’s punchy prose and all-too-true observations motivate you to go out and do something to liberate yourself-and other women.”  — Leora Tanenbaum, author of Slut! Growing Up Female with a Bad Reputation

A ground-breaking, worldwide bestselling study of women’s oppression that is at once an important social commentary, a passionately argued masterpiece of polemic, and a feminist classic.

The publication of Germaine Greer’s The Female Eunuch in 1970 was a landmark event, raising eyebrows and ire while creating a shock wave of recognition in women around the world with its steadfast assertion that sexual liberation is the key to women's liberation. Today, Greer's searing examination of the oppression of women in contemporary society is both an important historical record of where we've been and a shockingly relevant treatise on what still remains to be achieved.


Praise For The Female Eunuch…

“A dazzling combination of erudition, eccentricity, and eroticism.” — Newsweek

“The best feminist book so far . . . A book with personality, a book that knows the distinction between the self and the other, a book that combines the best of masculinity and femininity.” — New York Times

“This book changed my life. Germaine Greer is brave and crazy, serious and fun, sharp and sexy.” — Adventures of Sword & Sorcery

“At times funny, at times ferocious, and at times frustrating, The Female Eunuch remains an important historical document, one which makes palpable both the passion and the venom that brought feminism’s second wave to life.” — Adelaide Advertiser

“Like a woman, this book gets better with age. Greer’s punchy prose and all-too-true observations motivate you to go out and do something to liberate yourself-and other women.” — Adult Leadership

Germaine Greer is a writer, academic, and critic, and is widely regarded as one of the most significant feminist voices of our time. Her bestselling books include The Female Eunuch and The Whole Woman. She lives in northwest Essex, England, and has taught Shakespeare at universities in Australia, Britain, and the United States.