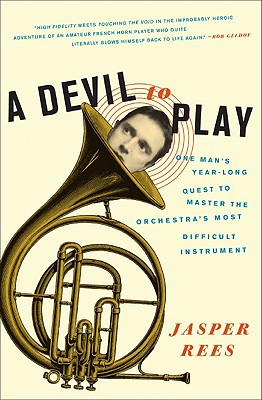 A Devil to Play

In the days before his fortieth birthday, London-based journalist Jasper Rees trades his pen for a French horn that has been gathering dust in the attic for more than twenty-two years, and, on a lark, plays it at the annual festival of the British Horn Society.

Despite an embarrassingly poor performance, the experience inspires Rees to embark on a daunting, bizarre, and ultimately winning journey: to return to the festival in one year's time and play a Mozart concerto—solo—to a large paying audience.

A Devil to Play is the true story of an unlikely midlife crisis spent conquering sixteen feet of wrapped brass tubing widely regarded as the most difficult instrument to master, as well as the most treacherous to play in public. It is the history of man's first musical instrument, a compelling journey that moves from the walls of Jericho to Sgt. Pepper's Lonely Hearts Club Band, from the hunting fields of France to the heart of Hollywood. And it is the account of one man's mounting musical obsession, told with pitch-perfect wit and an undeniable charm—an endearing, inspiring tale of perseverance and achievement, relayed masterfully, one side-splittingly off-key note at a time.

A journalist with two decades of experience, Jasper Rees has written for The Daily Telegraph, The Independent, the Evening Standard, and The Times. He lives in London.