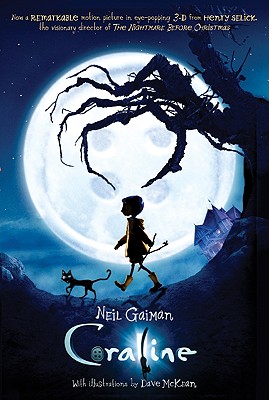 When Coraline explores her new home, she steps through a door and into another house just like her own . . . except that it's different. It's a marvelous adventure until Coraline discovers that there's also another mother and another father in the house. They want Coraline to stay with them and be their little girl. They want to keep her forever!

Coraline must use all of her wits and every ounce of courage in order to save herself and return home.

“Gaiman’s tale is inventive, scary, thrilling and finally affirmative. Readers young and old will find something to startle them.”
-Washington Post Book World

“Gaiman’s pacing is superb, and he steers the tension of the tale with a deft and practiced narrative touch.”
-Bulletin of the Center for Children’s Books

“Ladies and gentlemen, boys and girls, rise to your feet and applaud: Coraline is the real thing.”
-Philip Pullman, The Guardian

“The most splendidly original, weird, and frightening book I have read, and yet full of things children will love.”
-Diana Wynne Jones

“It has the delicate horror of the finest fairy tales, and it is a masterpiece.”
-Terry Pratchett

“ Walk through the door and you’ll believe in love, magic, and the power of good over evil.”
-USA Today

“So wonderfully whimsical that readers of all ages will hungrily devour itCoraline is destined to become a classic.
-Globe and Mail (Toronto)

“Chilly, finely-wrought prose, a truly weird setting and a fable that taps into our most uncomfortable fears.”
-Times Educational Supplement

“A deliciously scary book that we loved reading together as a family.”
-Orson Scott Card