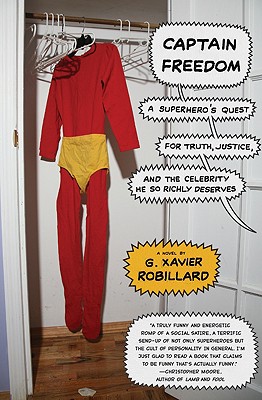 A Superhero's Quest for Truth, Justice, and the Celebrity He So Richly Deserves

“Captain Freedom may be super strong and able to fly, but that doesn't seem to help him make the right choices with his career, secret identity, sidekick, or political decisions. (Can you say, 'Governor Freedom of California'?) This fantastic fantastical novel brings superherodom into a whole new light.”
— Calvin Crosby, Books Inc., San Francisco, CA
View the List

Freedom's fifteen minutes are over!

The Superhero lifestyle is all that Captain Freedom has ever known. What's he supposed to do now? Enter politics? Write a children's book?

Freedom's in a bad way and he's only a stint in rehab away from a lifetime of celebrity reality shows. But with the guidance of his new life coach, maybe Freedom can stumble in a new direction—even if it means having to make peace with his parents . . . or finally commit to a single long-term archenemy.


Praise For Captain Freedom: A Superhero's Quest for Truth, Justice, and the Celebrity He So Richly Deserves…

“Captain Freedom is a truly funny and energetic romp of a social satire, a terrific send up of not only of super heroes, but the cult of personality in general.” — -Christopher Moore, author of Lamb and Fool