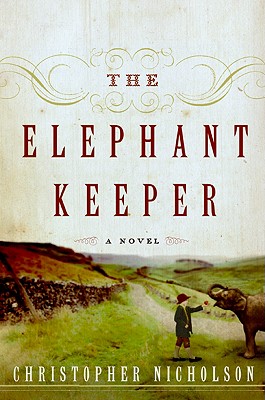 “This story of two baby elephants and the young man who becomes their keeper is a great read, and Christopher Nicholson's exploration of the relationship between Tom, the elephant keeper, and Jenny the elephant is wonderful.”
— Martha Arnett, Carpe Librum Booksellers, Knoxville, TN
View the List

A poignant and magical story set in eighteenth-century England, The Elephant Keeper by Christopher Nicholson is the tale of two baby elephants and the young man who accidentally finds himself their guardian. Every reader who was enchanted by Sara Gruen’s Water for Elephants or enthralled by When Elephants Weep will adore Nicholson’s The Elephant Keeper—a masterful blending of historical novel, coming-of-age tale, animal adventure, and love story.


Praise For The Elephant Keeper…

“A sensitive boy suddenly becomes groom to Timothy and Jenny, the first pair of young elephants brought into England in the 1700s. This informative, engaging and moving book has clear insight into the impact of poverty, alienation and isolation that is as relevant today as it was then.”
— San Francisco Chronicle Book Review

“An extended meditation on human needs and how our choices shape a better or lesser existance. [A] poignant, heartfelt novel.”
— St. Louis Post-Dispatch

“This elegant story is not just for animal lovers. In it, readers see how the bonds of friendship go beyond time, age or species. Definitely one to put on your “to read” list.”
— Deseret Morning News

“An endearing account of a virtually telepathic relationship between man and animal.”
— Booklist

“[Nicholson’s] lush new novel of the late 18th century…Jenny is a magnificent character…She gives the book its weight, in every sense…the sheer richness of the story’s texture. The Elephant Keeper evokes 18th-century village and estate life beautifully, and is stuffed with fascinating data from medical and veterinary history.”
— The Independent (UK)

“Endearing...Like the elephant at its centre, Nicholson’s book is gentle, profound and sweet-natured.”
— The Guardian

“Christopher Nicholson traces the arc of Tom and Jenny’s surprising journey with delicate empathy. He confronts sex, violence and power, but he does not shy away from less dramatic themes, such as gentleness and companionship, which help to make The Elephant Keeper such a rewarding book.”
— Times Literary Supplement (London)

“A captivatingly original novel…This is a wonderful feat of story-telling, remarkable for its ability to wrench your heart without resorting to easy sentimentality.”
— Daily Mail (London)

“[A] remarkable debut. An unforgettable picture of an elephant/human relationship so close that, as the elephant learns to think like a human, she teaches her human to think like an elephant. This is one of the best books of the year.”
— BookPage

“THE ELEPHANT KEEPER is a strange tour of late 18th-century England, a natural history of elephants and the story of a most unusual friendship, all told with a touch of the otherworldly elegance and wit of Babar.”
— Washington Post

A prizewinning radio documentary producer who has worked for the BBC World Service, Christopher Nicholson rode an elephant for the first time at Chitwan National Park in Nepal. He has been interested in natural history his entire life, and many of the programs he produced for the BBC revolved around the connection between animals and humans. Because of a love for the novels of Thomas Hardy, Nicholson and his wife settled in Dorset, England, with their two children.