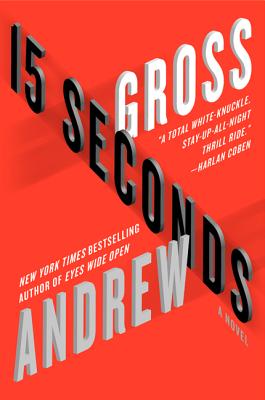 “Fifteen seconds is all it took to cause an innocent man to start running for his life. The train of set-ups is so believable that it is no wonder that the police want to shoot Dr. Henry Steadman on sight. We are taken along for a white-knuckle ride as irrefutable evidence against him piles up and Henry's only hope to survive and save his daughter is to avoid capture so he can find out who is framing him and why. This is the best yet from Andrew Gross.”
— Nancy McFarlane, Fiction Addiction, Greenville, SC
View the List

“A total white knuckle, stay-up-all-night thrill ride. Enjoyed the heck out of it!”
—Harlan Coben

A writer “in the company of Child and Coben” (Connecticut Post), New York Times bestseller Andrew Gross is the acclaimed author of The Blue Zone, Eyes Wide Open, and other exceptional suspense thrillers. Now, with 15 Seconds, he delivers an electrifying, lightning-paced story of a desperate man on the run, trying to save his family from the faceless enemy that’s determined to destroy them all. A gripping tale of a life turned upside-down in 15 Seconds, Gross’s stunner is a must for fans of James Patterson, David Baldacci, Jeffery Deaver, Lisa Gardner, Nelson DeMille, Tess Gerritsen, or anyone who likes action and suspense done to perfection.

“A total white knuckle, stay-up-all-night thrill ride. Enjoyed the heck out of it!”
— Harlan Coben

“Gripping...coming up on the rails behind Harlan Coben and Lee Child.... Very diverting.”
— Evening Standard (UK)

“An intensive manhunt....Thrillingly realistic with a surprising resolution.
— Publishers Weekly