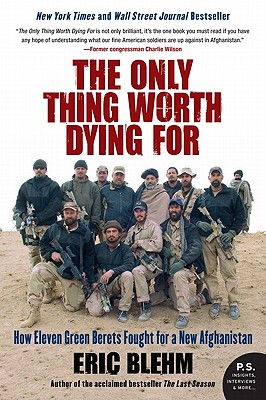 The Only Thing Worth Dying For

How Eleven Green Berets Fought for a New Afghanistan

"The one book you must read if you have any hope of understanding what our fine American soldiers are up against in Afghanistan.” —Former Congressman Charlie Wilson

From the author of the award-winning THE LAST SEASON, the untold story of the U.S. Army Special Forces team that conquered the Taliban against overwhelming odds while protecting Hamid Karzai, viewed at the time as the country’s best hope for a successful, democratically-elected leader.

On a moonless night just weeks after September 11, 2001, a U.S. Special Forces team of Green Berets known as ODA 574 infiltrated the mountains of southern Afghanistan with a seemingly impossible mission: to foment a tribal revolt and force the Taliban to surrender. Armed solely with the equipment they could carry on their backs, shockingly scant intelligence, and their mastery of guerrilla warfare, Captain Jason Amerine and his ten men had no choice but to trust their only ally, a little-known Pashtun statesman named Hamid Karzai. Having returned from exile, Karzai—on the run from the Taliban—was traveling the countryside to raise a militia.

The Only Thing Worth Dying For chronicles the most important mission in the early days of the Global War on Terror, when the men on the ground knew little about the enemy—and their commanders in Washington knew even less. With unprecedented access to surviving members of ODA 574, key war planners, and Karzai himself, award-winning author Eric Blehm cuts through the noise of politicians and high-level military officials to narrate for the first time a story of uncommon bravery and terrible sacrifice, intimately exposing the realities of unconventional warfare and nation-building in Afghanistan that continue to shape the region today.


Praise For The Only Thing Worth Dying For: How Eleven Green Berets Fought for a New Afghanistan…

“The Only Thing Worth Dying For is not only brilliant, it’s the one book you must read if you have any hope of understanding what our fine American soldiers are up against in Afghanistan.” — Former Congressman Charlie Wilson

“A skillfully reported and masterfully written account of one of the most crucial moments of the War Against Terror. Blehm reminds us of the perils, the triumphs and the sacrifices made in the name of freedom.” — Bob Woodruff, ABC News correspondent

“Through careful reporting and crisp narrative pacing, Eric Blehm has given us a thrilling, forgotten drama from the opening chapter of the war in Afghanistan. The Only Thing Worth Dying For will become an enduring classic of this extraordinary theater, where so much hangs in the balance.” — Hampton Sides, bestselling author of Ghost Soldiers and Blood and Thunder

“Blehm provides powerful and unflinching insight into a real-life mission that ended in tragedy but left an indelible mark on history. From the comic moments to the bleakest hour, it’s a testament to how a small team of well-trained men can shape a nation’s destiny.” — Stephen Grey, award-winning author of Ghost Plane and Operation Snakebite

“Eric Blehm has written a literary masterpiece about modern war. The whole witches’ brew is here: valor, honor, heroism, cowardice, incompetence, stupidity, triumph, blood, death and despair. That America has soldiers like these should fill every American heart with pride. Read this book!” — Stephen Coonts, bestselling author of Flight of the Intruder and The Disciple

“No other book has gone to such depths in research, nor been so descriptive in recounting this critical mission during the earliest days after 9/11 when the US Army Special Forces successfully waged unconventional warfare in Afghanistan.” — Sergeant Major Billy Waugh, author of Hunting The Jackal and Isaac Camacho

“The greatest story of a small unit’s battle through an untamed land since Lawrence of Arabia.” — Adam Makos, editor of Valor Magazine

“A captivating account of our heroic warriors-a remarkable U.S. Army Special Forces unit’s hard-fought success against incredible odds. It reads with the thrill of fiction—but this is the damned deadly real deal.” — W.E.B. Griffin & William E. Butterworth IV, best-selling authors of The Traffickers and The Honor of Spies

“[A] stirring account of American Special Forces heroics… The author provides a minute-by-minute account of this dramatic campaign, and the page never flags… a gripping story of admirable men.” — Kirkus Reviews

Eric Blehm is the award-winning author of the New York Times bestsellers Fearless and The Only Thing Worth Dying For. His first book, The Last Season, was the winner of the National Outdoor Book Award and was named by Outside magazine as one of the "greatest adventure biographies ever written." He has dedicated his life to telling the stories of those who serve.