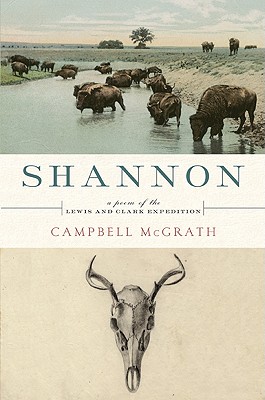 A Poem of the Lewis and Clark Expedition

“An unexpected story and a gem of a book.”
—Pittsburgh Post-Gazette

The incomparable Campbell McGrath, whom Outside magazine calls, “A writer who could help save poetry from academia and get the rest of us reading it again,” delivers an astounding work: Shannon, an epic poem that traces the remarkable journey of the youngest member of the Lewis and Clark expedition. The Kansas City Star praises Shannon as, “A luminescent narrative…a myth of American character before its corruption,” and Campbell McGrath—Poet Laureate, Guggenheim Fellowship, Pushcart Prize, and three-time Academy of American Poets Prize winner—proves once again to be truly an “everyman poet” who channels the spirit of Walt Whitman in this lyrical adventure.


Praise For Shannon: A Poem of the Lewis and Clark Expedition…

“A luminescent narrative...the stanza spacing, the line breaks and the quiet rhythms of Shannon’s speech ...suggest the continent’s vastness...Shannon’s understated lyricism — the apprehension of nature before the onset of self-consciousness...reflects heightened maturity in McGrath’s work.”
— Kansas City Star

“McGrath takes us back to a pivotal point in United States history through the curious eyes of an unsung hero. [’Shannon’ is] an unexpected story and a gem of a book.”
— Pittsburgh Post-Gazette

“A meditation on a new, westering nation’s discovery of its own inestimable riches....Surely, the sort of task McGrath undertakes here represents one of literature’s profoundest pleasures. A poet tirelessly digs up something buried by days, years, centuries. And then he holds it to the light.”
— Washington Post

Campbell McGrath is the author of nine previous books, eight of them available from Ecco Press. He has received numerous prestigious awards for his poetry, including a MacArthur Foundation “genius grant,” and a Guggenheim Fellowship. He has been published in the New York Times, Harper’s Magazine, the Paris Review, the New Yorker, Poetry, and Ploughshares, among other prominent publications, and his poetry is represented in dozens of anthologies. He teaches in the MFA program at Florida International University, and lives with his family in Miami Beach.