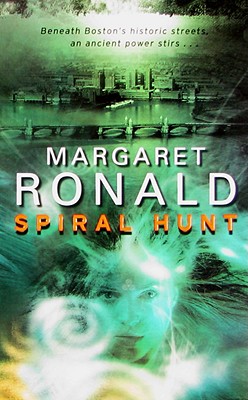 Some people have the Sight. Genevieve Scelan has the Scent.

They call her "Hound," and with her unique supernatural sense Evie can track nearly anything—lost keys, vanished family heirlooms . . . even missing people. And though she knows to stay out of the magical undercurrent that runs beneath Boston's historic streets, a midnight phone call from a long-vanished lover will destroy the careful boundaries she has drawn. Now, to pay a years-old debt, Evie must venture into the shadowy world that lies between myth and reality, where she will find betrayal, conspiracies, and revelations that will shatter all she believes about herself and the city she claims as home.

“I loved, loved, loved this book. I picked it up before bed and couldn’t put it down. Fantastic, moving, thrilling -- deeply thoughtful -- and beautifully crafted . . . [T]his was one of the best books I’ve read in a long time.”
— New York Times bestselling author Marjorie M. Liu

“[A] fun adventure, a promising start to a new series and a solid first novel.”
— Locus

“[O]ne of the better books I’ve read based on Celtic matter.”
— Charles de Lint, Magazine of Fantasy and Science Fiction

“[R]efreshing. . . One thing in particular that I found very attractive about this book is that Ronald concentrates entirely on Celtic mythology while building her world . . . SPIRAL HUNT offers a tremendous sense of place.
— Elizabeth Bear, Realms of Fantasy

Margaret Ronald learned to read on a blend of The Adventures of Tintin, Greek mythology, and Bloom County compilations. Her vocabulary never quite recovered. The author of two previous Evie Scelan novels, Spiral Hunt and Wild Hunt, Margaret has also written stories for Realms of Fantasy, Strange Horizons, Baen's Universe, and Fantasy Magazine.