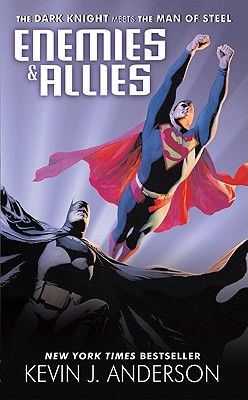 “[A] fun read….Batman and Superman meet in this retro-flavored novel set amid the Cold War sensibilities of the 1950s.”
—USA Today

The Dark Knight meets the Man of Steel in Enemies & Allies—the thrilling story of the first-ever  meeting between Batman and Superman, brilliantly imagined by New York Times bestselling author Kevin J. Anderson. One of today’s most popular writers pits the iconic superheroes against Lex Luthor and the Soviets—and each other—in a spellbinding story of destiny and duty set against the backdrop of America’s Cold War era.

Positioning all the superpowered heroics squarely between the era’s futuristic optimism and postwar paranoia, this is a refreshing diversion from the grimness of The Dark Knight or the tedious Superman Returns. Injects a welcome dose of retro exuberance into the capes-and-tights routine.
— Kirkus Reviews

“Anderson keeps us guessing throughout with cleverplot twists and some intriguing alternate cold war history.”
— Booklist

“The X-Files is a true masterpiece. There’s no more challenging series on television, and as a bonus, it’s also brainy fun.”
— Los Angeles Times

Kevin J. Anderson has published more than eighty novels, including twenty-nine national bestsellers. He has been nominated for the Nebula Award, the Bram Stoker Award, and the SFX Reader's Choice Award. His critically acclaimed original novels include Captain Nemo, Hopscotch, and Hidden Empire. He has also collaborated on numerous series novels, including Star Wars, The X-Files, and Dune. In his spare time, he also writes comic books. He lives in Wisconsin.