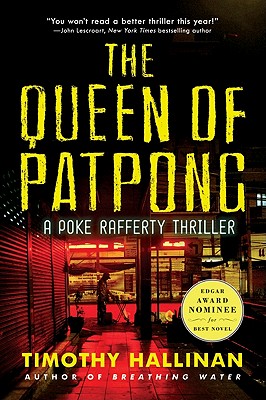 The Queen of Patpong

“If you like thrillers with complex characters and those that are so atmospheric that you can smell the food and feel the humidity, you'll love the Poke Rafferty series. In a delicate balance between knife-edge suspense and charming, cheerful domestic scenes, the street-smart travel writer and an army of bar girls go up against a serial killer who wants Rafferty's wife dead. Hallinan keeps getting better and better!”
— Carol Schneck, Schuler Books & Music, Okemos, MI
View the List

“Hallinan is a wordsmith of the first order, and he puts his great narrative skills into overdrive on this one….You won’t read a better thriller this year!”
—John Lescroart, New York Times bestselling author of Treasure Hunt

Author Timothy Hallinan returns to Bangkok, Thailand—and plunges his protagonist, travel writer Poke Rafferty, into graver peril than ever before—in The Queen of Patpong, Hallinan’s fourth Rafferty thriller following A Nail Through the Heart, The Fourth Watcher, and Breathing Water.  Fans of John Burdett, Alexander McCall Smith, Daniel Silva, and Alan Furst who love being transported to exotic locales will be riveted when a nightmare figure from the past arrives at Poke Rafferty’s door to bring chaos and danger to the lives of the people he loves.


Praise For The Queen of Patpong: A Poke Rafferty Thriller…

“Compassionate.... [Hallinan casts] an empathetic but incisive eye on a class of people often reduced to mere caricature.”
— Publishers Weekly

“Ferociously compelling and deeply moving – the rare thriller that manages to keep you on the edge of your seat at the same time it opens your eyes and heart.”
— Lou Berney, author of Gutshot Straight

“I have loved all of Tim Hallinan’s “Bangkok” novels, and his latest, The Queen of Patpong, is the best yet.... You won’t read a better thriller this year!”
— John Lescroart, New York Times bestselling author of Treasure Hunt

“Tim Hallinan is one of the great unsung mystery writers. His latest in the Poke Rafferty series is his best yet.... John Burdett writes about Bangkok. Tim Hallinan IS......Bangkok. I adore this book.”
— Ken Bruen, author of London Boulevard

“The Queen of Patpong is a razor-sharp, convincing, and heartbreaking glimpse of the dark underbelly of a culture, and a white-knuckle thriller all in one. Hold on tight and cancel your morning meetings. Hallinan is a stunning talent.”
— Gregg Hurwitz, author of Trust No One

“Timothy Hallinan’s The Queen of Patpong is pure magic; a compelling thriller grown from a dark and treacherous soil.... Hallinan is courageous in his exploration of sexual exploitation, greed and corruption. I’ve read no one better on the subject.”
— Stephen Jay Schwartz, bestselling author of Boulevard

“The Queen of Patpong is simply outstanding. Compelling, heart-wrenching, and oh so satisfying.... Hallinan has once again proved to me why he is one of my all time favorite authors.”
— Brett Battles, author of Shadow of Betrayal

“Timothy Hallinan has written a thriller that hits every bulls-eye. An exotic locale, a human, all-too-believable protagonist, and a villain that would give James Lee Burke nightmares. The Queen of Patpong reads like a bullet train on fire.”
— Gar Anthony Haywood, Shamus Award-winning author of Cemetery Road

“Hallinan takes his Poke Rafferty series to the next level with this taut, offbeat and fast-moving thriller.... Hallinan’s unlikely hero shines in this sometimes funny, always engrossing and undeniably authentic story that explores a dark and fascinating side of Thailand.”
— Kirkus Reviews (starred review)

“[The Queen of Patpong] is a breakthrough.... Riveting, genuinely, moving, and entirely plausible.... A terrific page-turner, and the surprising denouement will thrill readers who want the good guys—or girls— to win in the end.”
— Booklist (starred review)

Timothy Hallinan is the author of nine widely praised books: eight novels—including the Bangkok thrillers featuring Poke Rafferty—and a work of nonfiction. Along with his wife, Munyin Choy, he divides his time equally between Los Angeles, California, and Southeast Asia.