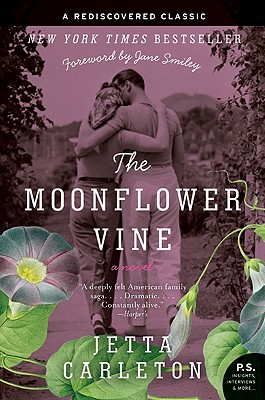 “Jetta Carleton's 1962 classic, now available in a new edition, is a lovely, captivating, and surprising story about a deceivingly simple farm family with four daughters. It deals with big push-and-pull family issues like betrayal, doubt, and rebellion, on the one hand, and loyalty, faith, and forgiveness, on the other. This book has it all and says it beautifully.”
— Margie Petersen White, The Bookstore, Glen Ellyn, IL
View the List

On a farm in western Missouri during the first half of the twentieth century, Matthew and Callie Soames create a life for themselves and raise four headstrong daughters. Jessica will break their hearts. Leonie will fall in love with the wrong man. Mary Jo will escape to New York. And wild child Mathy's fate will be the family's greatest tragedy. Over the decades they will love, deceive, comfort, forgive—and, ultimately, they will come to cherish all the more fiercely the bonds of love that hold the family together.

Jetta Carleton (1913-1999) moved from Holden, Missouri, to New York City to work as a television copywriter for national advertising agencies. Her widely beloved New York Times bestseller The Moonflower Vine was, until now, her only published novel.