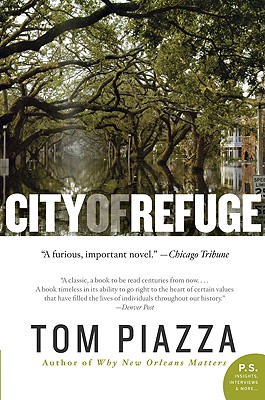 In City of Refuge, a heart-wrenching novel from Tom Piazza, the author of the award-winning Why New Orleans Matters, two New Orleans families—one black and one white—confront Hurricane Katrina, a storm that will change the course of their lives. Reaching across America—from the neighborhoods of New Orleans to Texas, Chicago, and elsewhere—City of Refuge explores this turning point in American culture, one whose reverberations are only beginning to be understood.


Praise For City of Refuge: A Novel…

“Explaining this city’s inexorable, gravitational pull to outsiders who see only corruption, crime, poverty, and malarial weather is a tough order, but every page of Piazza’s deeply felt story explains a larger truth about why people live where they do: because it’s home, and heart.” — Washington Post

“Though [its] stories are fictional, they may bring home the tragedy of Hurricane Katrina in a way all those news reports could not.” — Atlanta Journal-Constitution

“The big Katrina novel here at last, reconstructing a city’s stubborn spirit through a writer’s keen vision into singular human hearts. . . . Piazza strikes a blow for the recovery with this fine book, a perfect storm of love and anger.” — New Orleans Times-Picayune

“Likely to become a classic of the future. . . . Its narrative voice is on a par with Steinbeck’s Grapes of Wrath. . . . An important book [that] anyone who cares about New Orleans should read.” — Gather.com

“We’ve seen the broad outlines of this story on TV. But through Piazza’s pen, we feel—maybe fully for the first time—the surprise and horror as floodwaters sweep through neighborhoods, inching toward attics.” — Houston Chronicle

“Rich with New Orleans atmosphere and so believable. . . . It’s like living through the storm again.… as hard as it is for people here to read, it’s a book that finally explains what happened. . . . The rest of the country needs to read this novel.” — Baton Rouge Advocate

“While the characters…are fictional and the events are real, Piazza makes it feel like it is the other way around. His heroes brim with life, while the city’s destruction feels otherworldly. …a tribute to what was, and how to go on from here.” — New York Post

“Richly detailed, delicately woven and compulsively readable. …an effective plea to appreciate and preserve a city and its way of life. …these neglected individuals and families will both inspire empathy and prevent tragedy in the future. Let’s hope that this is possible outside the realm of fiction.” — Jackson Free Press

“This emotional novel reads like a memoir, teeming with fear, anger, pathos, hope, determination, and love. It is absolutely essential reading for every American who watched and prayed through those terrible days.” — Library Journal (starred review)

“In unforgettable scenes of biblical consequence, Piazza dramatizes more devastatingly than any journalistic account the hurricane’s shocking aftermath, aligning the failure to protect, rescue, and respect the people of the Lower Ninth with the sweeping brutality of war. . . . A story as old and heartbreaking as humankind itself.” — Booklist (starred review)