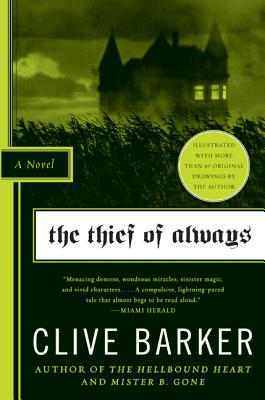 The Thief of Always

One of horror master and perennial bestseller Clive Barker’s earliest novels—the tale of a haunted house with many a dark secret.

Mr. Hood's Holiday House has stood for a thousand years, welcoming countless children into its embrace. It is a place of miracles where every childhood whim may be satisfied. There is a price to be paid, of course, but young Harvey Swick, bored with his life and beguiled by Mr. Hood's wonders, does not stop to consider the consequences. It is only when the house shows its darker face—when Harvey discovers the pitiful creatures that dwell in its shadows—that he comes to doubt Mr. Hood's philanthropy.

But the house and its mysterious architect are not about to release their captive without a battle. Mr. Hood has ambitions for his new guest, for Harvey's soul burns brighter than any he has encountered in ten centuries . . .


Praise For The Thief of Always…

"An impressive piece of storytelling." — Midweek

"Certain to satisfy anyone who just wants to take a fun little trip into one of Barker's worlds." — Virginia Pilot/Ledger Star

“Barker...sets up his enchanted kingdom with plenty of wit and atmosphere.” — Chicago Tribune

“A modern fable written with literary flare and storytelling-with-a-twist style that will entertain and enchant.” — San Diego Union-Tribune

“In a tale that manages to be both cute and horrifying, bestselling novelist and screenwriter Barker puts the dark side back into childhood fantasy.” — Publishers Weekly