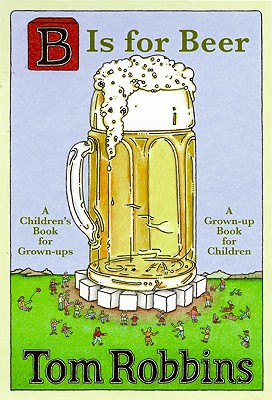 B Is for Beer

A Children's Book About Beer?

Yes, believe it or not—but B Is for Beer is also a book for adults, and bear in mind that it's the work of maverick bestselling novelist Tom Robbins, inter-nationally known for his ability to both seriously illuminate and comically entertain.

nce upon a time (right about now) there was a planet (how about this one?) whose inhabitants consumed thirty-six billion gallons of beer each year (it's a fact, you can Google it). Among those affected, each in his or her own way, by all the bubbles, burps, and foam, was a smart, wide-eyed, adventurous kindergartner named Gracie; her distracted mommy; her insensitive dad; her non-conformist uncle; and a magical, butt-kicking intruder from a world within our world.

Populated by the aforementioned characters—and as charming as it may be subversive—B Is for Beer involves readers, young and old, in a surprising, far-reaching investigation into the limits of reality, the transformative powers of children, and, of course, the ultimate meaning of a tall, cold brewski.


Praise For B Is for Beer…

“Kids at heart, and anyone bemused by Robbins’ previous novels, will guzzle down Robbins’ latest brew.”
— Denver Post

Tom Robbins was born in North Carolina in 1932 and raised in Virginia. A graduate of Virginia Commonwealth University, he moved to Seattle to do graduate work at the University of Washington. His internationally bestselling works include Still Life With Woodpecker, Fierce Invalids Home From Hot Climates, Jitterbug Perfume, Skinny Legs and All, Half Asleep in Frog Pajamas, Villa Incognito, and B Is For Beer. Robbins lives with his wife, Alexa D'Avalon, and their dog, Blini Tomato Titanium, in Washington State.