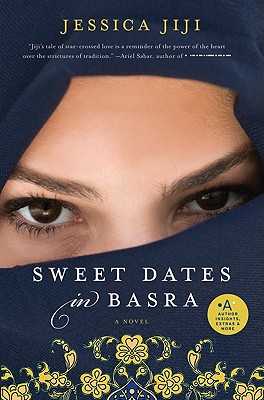 “In this story of love and search for identity, Jessica Jiji succeeds fully in capturing passions, depth of feeling, and strong relationships beyond ethnic and religious differences.”
—Naim Kattan, author of Farewell Babylon

Jessica Jiji’s Sweet Dates in Basra is a compelling, poignant, and unforgettable tale of friendship and family, set in Iraq during the second world war. A dramatic departure from Jiji’s previous novel, Diamonds Take Forever, Sweet Dates in Basra brilliantly captures the atmosphere of a volatile Middle East during the previous century and pays tribute to the lost traditions of a once-idyllic world.


Praise For Sweet Dates in Basra: A Novel…

“The cultural perspective and setting are a nice break from the wartime norm, as is the unexpected ending.” — Publishers Weekly

“Jiji does a remarkable job of evoking 1940s Iraq in her novel, from the colorful markets to the remote marshes, making for a vibrant read.” — Booklist

“This bittersweet story, based on the life of the author’s father, will resonate with readers who believe that Muslims and Jews can find common ground in the Middle East.” — Library Journal

“Infused with love and longing, Sweet Dates in Basra weaves a colorful tapestry of life in a multilayered society with all of its charms—family life, street life, markets, foods, and celebrations—a story that is rich in detail and highly absorbing.” — Yvette Raby, coauthor of The Lost World of the Egyptian Jews

“Jiji’s breezy tale of star-crossed love is a reminder of the power of the heart over the strictures of tradition.” — Ariel Sabar, author of My Father’s Paradise: A Son’s Search for His Jewish Past in Kurdish Iraq

“This novel is a powerful love poem. American readers will be fascinated by the solidarity and comradeship between the Muslim and Jewish families as they suffer crisis after crisis.” — Professor Saadi Simawe, author of Out of the Lamp and editor of Iraqi Poetry Today

“Sweet Dates in Basra is a moving novel which brings to life years of friendship and understanding, conflict and violence between Jews and Muslims in Basra. In this story of love and search for identity, Jessica Jiji succeeds fully in capturing passions, depth of feeling, and strong relationships beyond ethnic and religious differences.” — Naim Kattan, author of Farewell Babylon: Coming of Age in Jewish Baghdad

The daughter of an Iraqi immigrant, Jessica Jiji is a speechwriter for the secretary-general of the United Nations. Her first novel, Diamonds Take Forever, was published in 2005. She lives in New York City with her husband and three sons.