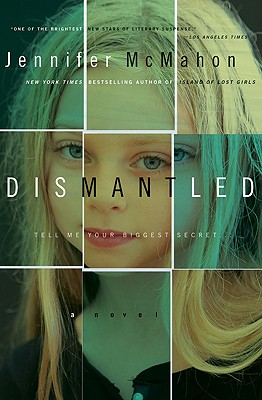 “Suz Pierce, brilliant and cruel, is dead. Ten years later, Henry and Tess, her friends, are still in orbit around her, haunted by remorse and guilt, their relationship slowing fracturing. Eight-year-old Emma desperately wants to keep her parents together, and, unwittingly, she sets off a series of events that nearly destroy them all. McMahon is a beautifully atmospheric writer, evocative of Daphne du Maurier.”
— Jennie Turner-Collins, Joseph-Beth Booksellers, Cincinnati, OH
View the List

“An eerie and gripping tale of suspense….A triumph.”
—Boston Globe

A stunning and chilling thriller from the author of the New York Times bestseller Island of Lost Girls that further burnishes her reputation as "One of the brightest new stars of literary suspense" (Los Angeles Times online).

When Henry, Tess, Winnie, and Suz form the Compassionate Dismantlers in college, the first rule of their manifesto is, "To understand the nature of a thing, it must be taken apart." But their penchant for acts of meaningful vandalism and elaborate, often dangerous pranks results in Suz's death in the woods of Vermont—a tragedy the surviving Dismantlers decide to cover up.

Nearly a decade later, Henry and Tess are desperate to forget, but their guilt isn't ready to let them go. When a mysterious Dismantler-style postcard drives a past prank victim to suicide, it sets off a chain of terrifying events that threatens to tear apart their world and engulf their inquisitive nine-year-old daughter, Emma. Is there someone who wants to reveal their secrets? Or is it possible Suz has found a way to enact revenge?

Full of white-knuckle tension with deeply human characters caught in circumstances beyond their control, Jennifer McMahon's enthralling story proves that she is a master at weaving the fear of the supernatural with the stark realities of life.


Praise For Dismantled: A Novel…

“[A]n eerie and gripping tale of suspense. And Emma is a triumph of characterization: It’s rare that I find an author who can so compellingly convey a child’s point of view.”
— Boston Globe

“Outstanding...By alternating the present-day lives with the origins of the Dismantlers, McMahon allows the inexorable sense of dread to build incrementally. Perhaps most memorable are not the young artists but Emma, a child whose intense imagination only adds fuel to the slow-burning fire.”
— Publishers Weekly (starred review)

“A failed marriage. A long-buried secret. A lonely child’s imaginary friend. From these simple ingredients, Jennifer McMahon has constructed a fun, twisty thriller. Expect DISMANTLED to earn comparisons to THE SECRET HISTORY.”
— Stewart O’Nan, author of SONGS FOR THE MISSING

“One of the brightest new stars of literary suspense.”
— Los Angeles Times (online)

“In her third, elegantly spooky mystery revolving around the vulnerability of a young girl and a haunting past, McMahon fashions a fresh and entrancing ghost-in-the-woods tale replete with startling psychoses, delectable Hitchcockian motifs, and dangerous attractions.”
— Booklist

“McMahon has once again written a suspensful and smart novel that weaves past and present seamlessly, slowly opening the minds of her characters in such a way that they almost feel like part of your real life long after you put the book down....Plan to read Ms. McMahon’s novel in one sitting and to nibble your fingernails to the nub.”
— The Chronicle (Vermont)

“The collective sins of four college friends come home to roost more than a decade after a bizarre tragedy scattered them in this disturbing, darkly hypnotic novel by McMahon…McMahon’s deftly creepy prose creates a world of chaos and abuse; the book brims with unexpected and often startling plot twists, taking the reader on a strange journey that never disappoints…beautifully written and extraordinarily imaginative.”
— Kirkus Reviews

“McMahon’s gift is the deliciously twisty way she subverts all your expectations, keeping you guessing with wry wit and feverish chills.”
— People