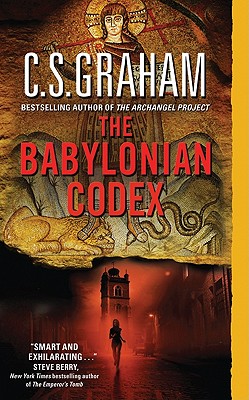 CIA agent Jax Alexander and remote viewer Tobie Guinness are back in The Babylonian Codex by C.S. Graham, racing to solve an ancient riddle and diffuse a plot to destroy the world. A relentlessly gripping thriller that takes off like a rocket and never slows down, The Babylonian Codex features apocalyptic prophecies, a mysterious inscription on a long-lost mosaic, and the assassination of the U.S. vice president. New York Times bestselling author James Rollins called Graham’s debut thriller, The Archangel Project, “As current as today’s headlines and as disturbing as your darkest nightmare….Riveting, provocative, and enthralling.” Now, two electrifying adventures later, this series is better than ever.

C.S. Graham is the pseudonym of writing team Steven Harris and Candice Proctor. Steven Harris spent twenty-one years as an Army Intelligence officer. His career ranged from participation in the Army's controversial domestic spying activities to running agents in Southeast Asia. He also spent ten years in Washington, D.C., working at the national intelligence level. Candice Proctor is the author of more than a dozen previous novels, including the critically acclaimed Sebastian St. Cyr mystery series published under the name C.S. Harris. A former academic with a P.h.D. in history, she has lived most of her life abroad, in Europe, the Middle East, and Australia.