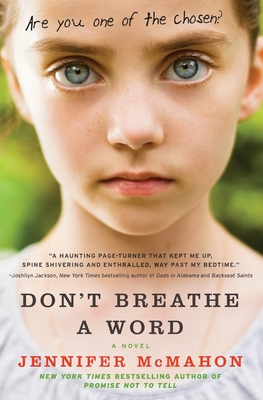 “Don’t Breathe a Word is a haunting page-turner that kept me up, spine shivering and enthralled, way past my bedtime.”
—Joshilyn Jackson, author of Never Have I Ever

On a soft summer night in Vermont, twelve-year-old Lisa went into the woods behind her house and never came out again. Before she disappeared, she told her little brother, Sam, about a door that led to a magical place where she would meet the King of the Fairies and become his queen.

Fifteen years later, Phoebe is in love with Sam, a practical, sensible man who doesn't fear the dark and doesn't have bad dreams—who, in fact, helps Phoebe ignore her own. But suddenly the couple is faced with a series of eerie, unexplained occurrences that challenge Sam's hardheaded, realistic view of the world. As they question their reality, a terrible promise Sam made years ago is revealed—a promise that could destroy them all.

“Jennifer McMahon never flinches and never fails to surprise…as [she] weaves a young couple into a perverse fairyland where Rosemary’s Baby could be at home.”
—Randy Susan Meyers, author of The Murderer’s Daughters


Praise For Don't Breathe a Word: A Novel…

“Beautifully written and spooky, Don’t Breathe a Word wraps around you and pulls you into a dark world of fairies and family secrets.” — Chevy Stevens, New York Times bestselling author of Still Missing

“Jennifer McMahon never flinches and never fails to surprise as her stories twist down unexpected roads. Don’t Breathe a Word balances love and horror as McMahon weaves a young couple into a perverse fairyland where Rosemary’s Baby could be at home.” — Randy Susan Meyers, author of The Murderer's Daughters

“[McMahon’s] smart mystery-thriller grabs you by the throat and won’t let go....making this a page-turner you’ll neglect sleep for.”  — People

“Jennifer McMahon’s novels are like the perfect winter truffle: dark, rich, earthy, and an absolute, decadent pleasure. Don’t Breathe a Word is a haunting page-turner that kept me up, spine shivering and enthralled, way past my bedtime.” — Joshilyn Jackson, NYT bestselling author of Gods in Alabama and Backseat Saints

“[A] strange and unsettling shocker ... With the tale’s outcome utterly unforeseeable even as it races along, “Don’t Breathe a Word” leaves you breathless.” — Wall Street Journal

Throughout the book, there are a lot of references to fairy tales. How do you think fairy tales mold children’s perceptions about the world? In what ways do fairy tales represent or mimic real world problems and fears?

How do you think the Evie/Lisa relationship and the Phyllis/Hazel relationship parallel each other? Does one woman in each bond hold sway over the other? Is it always apparent who’s really in control of the situation?

Throughout the book, it seems as if some men, or the idea of a man like Teilo, hold a strong power over the women. Why do you think this is? How are those men different from Sam and Dave?

Lisa’s unwavering belief in the fairies, despite the skepticism of everyone around her, is a driving force in the story. Is a fierce belief in something a strength or a weakness?

At one point, Sam states that instead of having cancer and heart disease passed down in their family, they have malevolent stories. Do you think the stories we tell have the power to shape, even change, reality? Are there stories that have been passed down in your family that, true or not, have become part of how you see yourself and where you come from?

We get to know Sam and Evie both as children and as adults. How do you think their childhood selves compare to their grown-up selves? Do you think the adults they became were shaped by what happened the summer Lisa went missing?

Part of the book is told from the point of view of Sam’s present-day girlfriend, Phoebe. She is the one character who was not part of the story’s central mystery, Lisa’s disappearance. Why do you think the author chose to tell the present day story from Phoebe’s perspective? Is she an effective narrator?

Evie, in some ways, is the most complicated character in the book. She is fiercely loyal to Lisa, yet she betrays her terribly; she wants the truth to come out, yet participates in the deception. Does Evie truly have Lisa’s best interests at heart? Is she responsible for all of her actions?

The ending of the book is open to different interpretations. What do you think really happened?