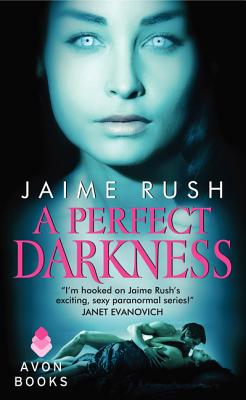 A Perfect Darkness (The Offspring #1)

They live ordinary lives, but they are extraordinary. They are the Offspring, children of a mysterious experiment gone awry—and they are in terrible danger.

A sexy stranger awakens Amy Shane in the dead of night. Lucas Vanderwyck barely has time to whisper a few words before three men burst into her bedroom and drag him away. But what Lucas reveals shatters Amy's safe little world forever.

Lucas and Amy share a psychic gift—a gift that could put them in mortal danger. And as they share night after night of savage passion, as a shadowy government conspiracy tracks their every move, they will fight to save each other. But only with their powers of second sight can they escape the terror of a perfect darkness.

Since she was a kid, Jaime Rush devoured books on unexplained mysteries and psychic phenomena. She knew she would be published, marry a fabulous guy, and win a Toyota Supra. Missing the romance, relationship drama, and action of her favorite television shows—X-Files, Roswell, and Highlander—she created her own mix in the Offspring series.