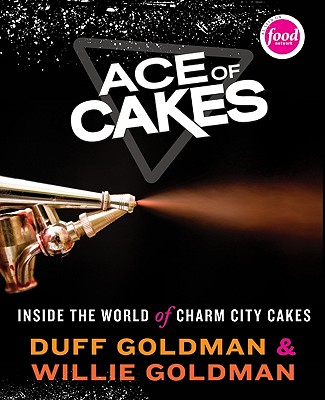 Inside the World of Charm City Cakes

In Ace of Cakes: Inside the World of Charm City Cakes, Duff Goldman, Food Network’s indomitable “Ace of Cakes,” reveals the inspiration behind some of the most outrageous and extraordinary, gravity and reality-defying confectionary creations in the world. An eye-popping collection of photos, illustrations, stories, reflections, collages, and memorabilia celebrating the eccentric Baltimore bakery where everything takes off, Ace of Cakes is a truly delectable volume that shows the magic that can happen when creativity is king and “no limits” is the mantra.

Duff Goldman studied at the Corcoran School in Washington, D.C., and was a young graffiti artist of some notoriety. He started working for acclaimed Baltimore chef Cindy Wolf while attending the University of Maryland, Baltimore County. He studied pastries at the Culinary Institute of America and worked at the French Laundry under acclaimed pastry chef Steven Durfee, at the Vail Cascade Hotel and Resort, and at Todd English's Olives restaurant in Washington, D.C., before opening Charm City Cakes in Baltimore in 2000. Duff is also a sculptor and artist, and a musician who plays bass in the rock band . . . soihadto . . . . He lives in Baltimore, Maryland.

When his younger brother was born, Willie Goldman couldn't pronounce "Jeffrey." It came out "Duff," and the name stuck. A screenwriter and producer, Willie began his career at NBC Burbank, where he worked on The Tonight Show with Jay Leno, The Fresh Prince of Bel-Air, Later with Greg Kinnear, and Hang Time, and then moved on to Warner Bros. Television, where he worked on the Emmy-winning drama E.R. for seven seasons. Willie also wrote an adaptation of the acclaimed James Crumley novel The Last Good Kiss. The co-creator and coexecutive producer of Ace of Cakes, Willie lives in Los Angeles.