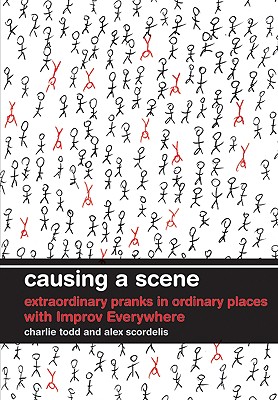 A fake U2 concert. A deranged hypnotist.

A book signing by a dead author.

Welcome to the wild world of Improv Everywhere.

From the infamous No Pants! Subway Ride to the legendary Grand Central Freeze, Improv Everywhere has been responsible for some of the most original and subversive pranks of the Internet age. In Causing a Scene, the group's agents provide a hilarious firsthand account of their mischievous antics. Learn how they created a time loop in a Starbucks and gave Best Buy eighty extra employees. Join in on the fun with this irreverent, behind-the-scenes look at Improv Everywhere's world-famous missions, and get inspired to create your own memorable mayhem.


Praise For Causing a Scene: Extraordinary Pranks in Ordinary Places with Improv Everywhere…

“[Causing a Scene], like the group itself, is inventive, entertaining, and frequently surprising.”
— Booklist

Charlie Todd is the founder of Improv Everywhere, producing, directing, performing, and documenting the group's work for over seven years. He is also a teacher and performer of improv comedy at the Upright Citizens Brigade Theatre in New York City.

Alex Scordelis grew up in Saratoga, California. He writes sketch comedy at the Upright Citizens Brigade Theatre, and has written for mental_floss. He's also a Senior Agent in Improv Everywhere, a New York City prank collective. Alex lives in Manhattan.