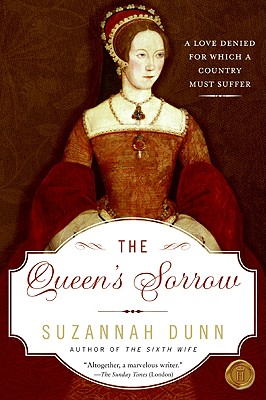 Plain and dutiful and a passionate Catholic, Mary Tudor is overjoyed when she becomes Queen of England. After the misery of her childhood, when her father, Henry VIII, rejected her and her mother, Mary feels at last that she is achieving her destiny. And when she marries Philip of Spain, her happiness is complete.

But Mary's delight quickly turns sour as she realizes that her husband does not love her—indeed, that he finds her devotion irritating. Desperate for a baby, she begins to believe that God is punishing her. Her people are horrified at the severity of the measures she takes and begin to to turn against their queen, who is lonely, frightened, and desperate for love.

Rafael, a member of Philip of Spain's entourage, reluctantly witnesses the tragedy that unfolds as the once-feted queen tightens her cruel hold on the nation. As Rafael becomes closer to Mary, his life—and newfound love—are caught up in the terrible chaos.

Suzannah Dunn is the author of ten novels in the United Kingdom, including The Sixth Wife and The Queen of Subtleties, both published in the United States as well. She lives in Brighton, England.

Mary Tudor is portrayed in The Queen’s Sorrow as a tragic figure as well as, increasingly, a tyrant. How sympathetic did you find her character? How much of her religious extremism can be explained or even excused by her personal unhappiness and difficult upbringing?

What insight, if any, do you think the author’s portrayal of Mary gives us into other historical figures and the ways in which personal motivations can underwrite the political? Is this a discussion that is relevant to today’s leaders?

The central characters in The Queen’s Sorrow are unfaithful to their spouses. How harshly should they be judged for this? What factors drive the various characters to be unfaithful? Can their actions be excused as a side-effect of the nature of marriage in sixteenth-century England and Spain?

Overall, is religion a destructive or constructive force throughout the novel? To what extent, if any, is the ideological debate in The Queen’s Sorrow relevant to the modern day?

Rafael spends much of the novel feeling uncomfortably ‘foreign’. What does his experience tell us about the sixteenth-century world view, and the ways in which these attitudes have (or haven’t) changed?

Cecily’s position throughout much of the novel is uncertain—she is neither married nor widowed, neither upper nor lower class. Rafael is similarly an outsider. What authority or insight do you think this marginal status gives these two characters? To what extent does this make it easier or more difficult for them to act in their own interests?

How responsible is Rafael for the events at the novel’s end? Are his actions motivated by kindness, naivety or an unwillingness to accept the truth? To what extent does his motivation excuse the results of his attempt to intervene on Cecily’s behalf?