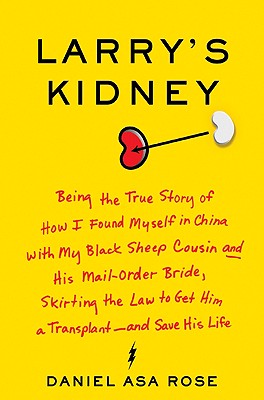 Being the True Story of How I Found Myself in China with My Black Sheep Cousin and His Mail-Order Bride, Skirting the Law to Get Him a Transplant--and Save His Life

“One of the funniest, most touching and bizarre nonfiction books I’ve read.”
—Boston Globe

Larry’s Kidney is Daniel Asa Rose’s wild-and-crazy memoir about his trip to Beijing, China, to help his black-sheep cousin Larry receive an illegal kidney transplant, collect a mail-order bride, and stop a hit-man from killing their uncle. An O. Henry Prize winner,  a two-time recipient of PEN Fiction Awards, and a 2006 National Endowment for the Arts Literary Fellow, Rose has written “a surprisingly fun, and moving, book with resonance” (Chicago Tribune).

Daniel Asa Rose has won an O. Henry Prize, two PEN Fiction Awards, and an NEA Fellowship. Formerly arts and culture editor of Forward and currently editor of the international literary magazine The Reading Room, he has written for The New Yorker, Esquire, GQ, the New York Times Magazine, and is the author of the acclaimed memoir Hiding Places. He lives in Massachusetts.