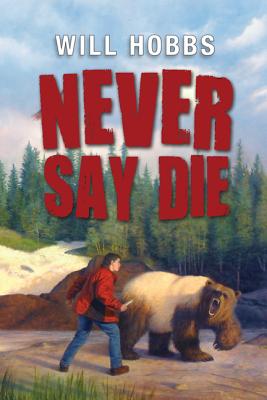 “Half-grizzly and half-polar bear? The ferocious man-eating Grolar Bear is no myth as 15-year-old Nick Thrasher discovers up close and personal. Hobbs delivers a taut mash-up of Inuit culture, the beauty of the Alaskan Arctic, lessons on global warming, and one memorable river trip. You'll never say 'climate change' again without remembering the Grolar Bear and this thrilling tale of survival.”
— Julie Shimada, Maria's Bookshop, Durango, CO
View the List

In this fast-paced adventure story set in the Canadian arctic, fifteen-year-old Inuit hunter Nick Thrasher comes face-to-face with a fearsome creature on a routine caribou hunt gone wrong. Part grizzly, part polar bear, this environmental mutant has been pegged the “grolar bear” by wildlife experts. Nick may have escaped this time, but it won’t be his last encounter.

Then Nick’s estranged half-brother, Ryan, offers to take him on a rafting trip down a remote part of the Firth River. But when disaster strikes, the two narrowly evade death. They’re left stranded without supplies—and then the grolar bear appears. Will Hobbs brings his singular style to this suspenseful story about two brothers fighting for survival against the unpredictable—and sometimes deadly—whims of nature.

“Purpose driven survival tale…a plot lit up with extremes of privation and deadly danger.”
— ALA Booklist

“Exciting…The imagery is truly majestic. It will resonate with kids who have a healthy respect for the awesomeness of nature.”
— School Library Journal

Will Hobbs is the award-winning author of nineteen novels, including Far North, Crossing the Wire, and Take Me to the River.

Never Say Die began with the author's eleven-day raft trip in 2003 down the Firth River on the north slope of Canada's Yukon Territory. Ever since, Will has been closely following what scientists and Native hunters are reporting about climate change in the Arctic. When the first grolar bear turned up in the Canadian Arctic, he began to imagine one in a story set on the Firth River.

A graduate of Stanford University, Will lives with his wife, Jean, in Durango, Colorado.