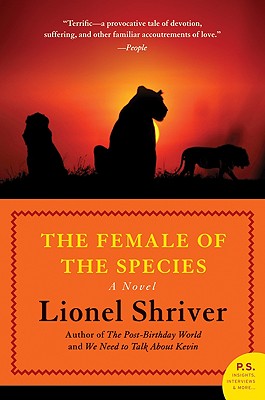 “Shriver’s debut is a 'literary' novel without an iota of pretentiousness. It reads with the grace of a well-written spy story, but conveys some of its author’s early wisdom about what our humanity both demands of and grants us.” —Washington Post

The first novel by the New York Times bestselling author Lionel Shriver, The Female of the Species is the exotic and chilling story of a highly independent and successful woman’s late-life romantic education, in all its ecstasy and desperation

Still unattached and childless at fifty-nine, world-renowned anthropologist Gray Kaiser is seemingly invincible—and untouchable. Returning to make a documentary at the site of her first great triumph in Kenya, she is accompanied by her faithful middle-aged assistant, Errol McEchern, who has loved her for years in silence. When sexy young graduate assistant Raphael Sarasola arrives on the scene, Gray is captivated and falls hopelessly in love—before an amazed and injured Errol's eyes. As he follows the progress of their affair with jealous fascination, Errol watches helplessly from the sidelines as a proud and fierce woman is reduced to miserable dependence through subtle, cruel, and calculating manipulation.


Praise For The Female of the Species: A Novel…

“Terrific—a provocative tale of devotion, suffering, and other familiar accountrements of love.”
— People

“Stunning . . . wide in its horizons, interesting in its insights, and satisfying in its conclusions.”
— Philadelphia Inquirer

“An exotic and inventive first novel ... It is hard not to admire the breadth and consistency of Lionel Shriver’s inventiveness and the exuberance of her imagination.”
— New York Times Book Review

“The quality and vividness of Errol’s imagination is a tribute to Shriver’s own; the pieces fall neatly and compellingly into place. This is a confident first novel, and a consuming one.”
— Publishers Weekly

“Shriver’s debut is a 'literary' novel without an iota of pretentiousness. It reads with the grace of a well-written spy story, but conveys some of its author’s early wisdom about what our humanity both demands of and grants us.”
— Washington Post

“All three characters are vividly developed, and the love relationships throughout the novel follow parallel and repetitive themes of masochistic obsession.”
— Booklist

“Shriver’s menage a trois is convincing, both as a power struggle and a love triangle.”
— Chicago Tribune