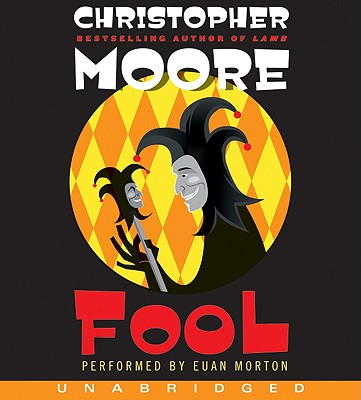 Christopher Moore, much beloved scrivener and peerless literary jester, now takes on no less than the legendary Bard himself (with the utmost humility and respect) with a twisted and insanely funny tale of a moronic monarch and his deceitful daughters, as seen through the eyes of a man wearing a codpiece and bells on his head.

Pocket has been Lear's cherished fool for years. So naturally Pocket is at his brainless, elderly liege's side when Lear demands that his kids swear to him their undying love and devotion. Of course Goneril and Regan are only too happy to brownnose Dad. But Cordelia believes that her father's request is kind of . . . well . . . stupid, and her blunt honesty ends up costing her her rightful share of the kingdom and earns her a banishment to boot.

Well now the bangers and mash have really hit the fan. And the only person who can possibly make things right . . . is Pocket. Now he's going to have do some very fancy maneuvering—cast some spells, start a war or two—the usual stuff—to get Cordelia back into Daddy Lear's good graces, to derail the fiendish power plays of Cordelia's twisted sisters, and to shag every lusciously shaggable wench who's amenable to shagging along the way.

Pocket may be a fool . . . but he's definitely not an idiot.