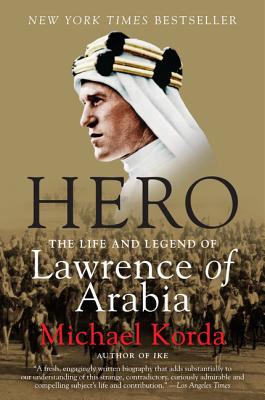 The Life and Legend of Lawrence of Arabia

From Michael Korda, author of the New York Times bestselling Eisenhower biography Ike and the captivating Battle of Britain book With Wings Like Eagles, comes the critically-acclaimed definitive biography of T. E. Lawrence—the legendary British soldier, strategist, scholar, and adventurer whose exploits as “Lawrence of Arabia” created a legacy of mythic proportions in his own lifetime. Many know T.E. Lawrence from David Lean’s Oscar-winning 1962 biopic—based, itself, upon Lawrence’s autobiographical Seven Pillars of Wisdom—but in the tradition of modern biographers like John Meacham, David McCullough, and Barbara Leaming, Michael Korda’s penetrating new examination reveals new depth and character in the twentieth century’s quintessential English hero.


Praise For Hero: The Life and Legend of Lawrence of Arabia…

“[A] beguiling biography. . . . Korda is at his best describing, after the heroics in the desert, the touching antiheroics of Lawrence’s later life.”
— New York Times Book Review

“In case you thought there was nothing let to say about T.E. Lawrence . . . along comes Michael Korda with Hero: brilliant, illuminating, un-putdownable, a masterpiece of biography about quite possibly the most fascinating and complex personality of the 20th century.”
— Christopher Buckley, author Losing Mum and Pup

“The strength of Hero lies in its ability to analyze Lawrence’s accomplishments and to add something meaningful to the larger body of Lawrence lore. . . . Mr. Korda writes with authority...Sagacious and valuable. . . . Most important, Mr. Korda makes himself a credible authority on some of the most egregious misconceptions that surround Lawrence’s story.”
— New York Times

“The story of T.E. Lawrence’s life is one well worth reading, particularly for its insights about the history of the Middle East.”
— USA Today

“Michael Korda captures the indomitable, tormented spirit of this extraordinary man. . . . Well crafted and excellent in its depiction of T.E. Lawrence as a multi-dimensional figure. . . . A fine biography.”
— Washington Post

“This magisterial biography of British soldier and adventurer T.E. Lawrence celebrates a life spent subverting authority in the most glamorous--and bizarre--ways. Korda’s vivid portrait of Lawrence and his warring impulses captures the brilliance and charisma of this fascinating figure.”
— Publishers Weekly (starred review)

“Michael Korda’s new biography of Lawrence of Arabia is big-hearted and provocative—a page-turner that also helps us understand how the Middle East became the confused mess it is today. Hero is a magnificent achievement.”
— Nathaniel Philbrick, author of The Last Stand

“A splendid biography about a most unusual and extraordinary individual.”
— Hugh Thomas, author of The Spanish Civil War

“T.E. Lawrence is next to impossible to fix on the page. Yet Michael Korda has done so, delivering up a crowded, improbable life in a page-turning biography, every bit as rich as its protean subject. A splendid read.”
— Stacy Schiff, author of Cleopatra: A Life

“Few come closer to appraising the man in all his protean grandeur, and essential mystery, than Michael Korda. . . . One of the most compelling books I have read in a long time.”
— Sir Alistair Horne, CBE, author of A Savage War of Peace

“Much has been written about him, but no one has succeeded in illuminating the quintessential Lawrence of Arabia so profoundly and so well as Michael Korda. Hero is a work of brilliance, discernment and meticulous scholarship that surely will be hailed as the gold standard.”
— Henry A. Kissinger

“Lawrence of Arabia, one of the great heroes of any age, has found the right biographer in Michael Korda--a keen judge of the human condition and a master story teller who can separate myth from reality without diminishing the grandeur of his subject.”
— Evan Thomas, author of The War Lovers

“Comprehensive. . . . An accessible, textured story of one man who intimately knew the slings and arrows of outrageous fortune.”
— Kirkus Reviews

“Hero is a full-scale, major event, [and] a great biography. . . . The triumph of the book is Michael Korda’s brilliant, always balanced portrait of the infinitely fascinating Lawrence of Arabia, the relevance of which, now in our time, is of greater importance than ever.”
— David McCullough

“Michael Korda’s magisterial and beautifully illustrated new book... is a stunningly good biography of one of the most famous, yet least understood heroes of the 20th century.”
— Sarasota Herald-Tribune

“Hero is a portrait of Lawrence in all his complexity that is worth its 700-plus pages.”
— BookPage

“Korda’s biography of Lawrence’s life and legend conjure up a pathos and a very human side to the mystique of Lawrence of Arabia.”
— New York Journal of Books

“[Korda] has redrawn the map, and reinvented T.E. Lawrence, coming closest to giving this elusive holograph in a white dishdasha a pulse.”
— Daily Beast

“There couldn’t be a better time to brush up on the life and times of T.E. Lawrence. . . . Korda persuasively argues that had Lawrence’s vision for a Mideast peace prevailed after the war . . . that deeply troubled part of the world might be a far more peaceful, prosperous region than it is today.”
— Lisa Ko, author of The Leavers

“In Hero, Korda presents Lawrence’s life in minute, fascinating detail. . . . Korda’s extensive research and straightforward writing make this a valuable addition to the Lawrence library, a one-stop resource for all who are interested in this hero.”
— Dallas News
or
Buy Here
Copyright © 2020 American Booksellers Association