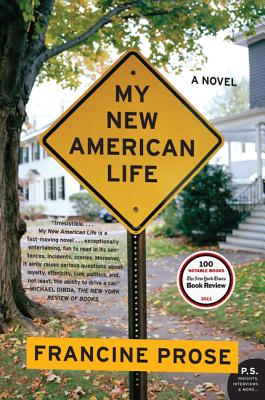 Francine Prose captures contemporary America at itsmost hilarious and dreadful in My New American Life, a darkly humorousnovel of mismatched aspirations, Albanian gangsters, and the ever-elusiveAmerican dream. Following her New York Times bestselling novels BlueAngel and A Changed Man, Prose delivers the darkly humorous storyof Lula, a twenty-something Albanian immigrant trying to find stability andcomfort in New York City in the charged aftermath of 9/11. Set at the frontlines of a cultural war between idealism and cynicism, inalienable rights andimplacable Homeland Security measures, My New American Life is a movingand sardonic journey alongside a cast of characters exploring what it means tobe American.


Praise For My New American Life: A Novel…

“An illuminating and ultimately upbeat look at America’s immigrant situation that all fiction readers will enjoy.”
— Barbara Hoffert, Library Journal

“Utterly charming. Savvy about the shady practices of both US immigration authorities and immigrants themselves... Entertaining, light yet not trivial, a joy to read.”
— Lionel Shriver

“Nothing is beyond the artistic reach of Francine Prose”
— Shelf Awareness

“A tangy mixture of satire and sentiment. . . . Ms. Prose uses her heroine’s outside status to make a lot of funny . . . observations about the cosseted life of well-to-do Americans.”
— Michiko Kakutani, New York Times

“Prose succeeds by transforming anxiety into compassion—it’s a little lever that gets tripped when we truly imagine what another person feels.”
— Los Angeles Times

“There has been a lot written about the Bush and Cheney days, but rarely from such an amusing perspective . . . at once honest, complicated, sexy, funny and—ultimately—uplifting.”
— BookPage

“Prose spins the many straws of American culture into a golden tale, shimmering with hilarious, if blistering, satire.”
— Helen Simonson, Washington Post

“Prose is in her sweet spot as a nimble chronicler of contemporary culture.”
— Entertainment Weekly

“In My New American Life, Francine Prose cracks open that old chestnut about the immigrant reinvention experience and injects, yes, new life into it.”
— USA Today

“Fun and funny,...a satire of immigration and its discontents...”
— San Francisco Chronicle

“Prose’s real aim is to characterize and caricature modern American life, mostly in a gentle way that will leave readers smarter than they were before...”
— St. Louis Post-Dispatch
or
Buy Here
Copyright © 2020 American Booksellers Association