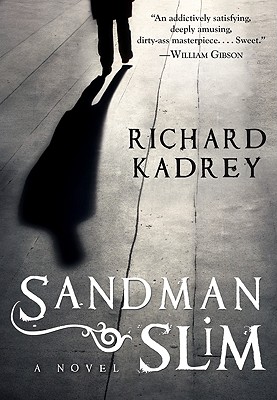 “How a book this dark can be this much fun to read is just one of many amazing things about Sandman Slim. After surviving 11 years in Hell -- literally -- Stark is ready for vengeance on the magicians who killed his girlfriend and sent him there. If he happens to avert the Apocalypse while he's doing it, that will be icing on the cake. Good Omens meets Raymond Chandler!”
— Carol Schneck, Schuler Books & Music, Okemos, MI
View the List

“I couldn’t put it down.”
—Charlaine Harris

Sandman Slim has arrived—a wild and weird, edge-of-your-seat supernatural roller-coaster rider that propels author Richard Kadrey to the forefront of the fantasy, thriller, and a host of other literary genres. This spellbinding, utterly remarkable tale of a vengeful magician/hitman’s return from hell is part H.P. Lovecraft, part Christopher Moore, part Jim Butcher, and totally, unabashedly dark, twisted, and hilarious.


Praise For Sandman Slim: A Novel…

“The most hard-boiled piece of supernatural fiction I’ve ever had the pleasure of reading. … all confident and energetic and fresh and angry. I loved this book and all its screwed-up people.”
— Cory Doctorow, author of Little Brother

“Sarcastic, irreverent and ridiculously enjoyable riff on the Urban Fantasy genre. … a lot like a mosh pit -- rough, exuberant, unpredictable -- and a heck of a lot of fun.”
— Miami Herald