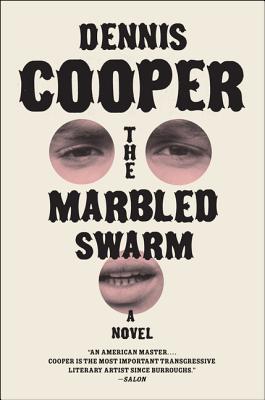 From literary cult hero Dennis Cooper comes his most haunting work to date.

“An American master…. Cooper is the most important transgressive literary artist since Burroughs.” --Salon

In secret passageways, hidden rooms, and the troubled mind of our narrator, a mystery perpetually takes shape—and the most compelling clue to its final nature is “the marbled swarm” itself, a complex amalgam of language passed down from father to son.

Cooper ensnares the reader in a world of appearances, where the trappings of high art, old money, and haute cuisine obscure an unspeakable system of coercion and surrender. And as the narrator stalks an elusive truth, traveling from the French countryside to Paris and back again, the reader will be seduced by a voice only Dennis Cooper could create.


Praise For The Marbled Swarm: A Novel…

“Provocative...Cooper’s interest in the darkest corners of the human experience...has not dimmed with age. The novel’s contradictory narratives intentionally echo the secret passageways in which the narrator’s predatory activities take place, creating a baroque, voyeuristic effect.
— New Yorker

“The Marbled Swarm is concerned as much with language as it is with relationships and power….His fantastical story of everyday cannibalism is told in such finely chiseled yet disorienting prose that you suspect you’re being led into a maze.”
— OUT Magazine

“Cooper’s status as an underground renegade of experimental fiction doesn’t reduce his talent or the brilliance of his dark views. He is a passionately humane writer. We need his voice now more than ever.”
— Paste Magazine

“… lies somewhere in between Lolita and Dracula, mixing the gothic terror and disturbing subject of both, within a contemporary bi-sexual, skinny jeaned, iPhone-totting environment, and a much further push of the envelope. … a novel that must be read.”
— The Coffin Factory

“In The Marbled Swarm, Cooper has coupled a clever intellectual romp with stomach-turning brutality and quite a bit of humor.”
— Washington Independent Book Review

“The most personal, and honest [of Cooper’s] daring, perplexing books.”
— BookForum

“Readers unfamiliar with transgressive fiction would do well to brace themselves for what will either be the shock of the unrelentingly different or, perhaps, the shock of recognizing writing that speaks to their souls.”
— Booklist

“… language every bit as thrilling, rapt, and brain-waking as we could want from one of our living legends…”
— Fanzine

“Patient and careful readers will be rewarded for their diligent attention to the text with a controversial, dazzling and intelligent work of literature.”
— Bookreporter.com

“There is a brutal honesty to this novel, a brutal wisdom.”
— Barnes & Noble's "Unabashedly Bookish"

“The Marbled Swarm is a mindbending masterpiece from one of my all-time favorite writers. It is vivid, slippery, ferocious, and rich with secrets. Nobody else could have written this novel and nothing else like it exists.”
— Justin Taylor, author of The Gospel of Anarchy and Everything Here is the Best Thing Ever

“Disquieting, humbling, and sadly beautiful in the way only Dennis Cooper can be, The Marbled Swarm is a mystifying and courageous novel that represents his finest work to date.”
— Patrick deWitt, author of The Sisters Brothers and Ablutions

“This gorgeously warped brain-bender of a novel… reimagines the family romance (fathers-and-sons side only) in perfections of language that will startle and seduce you anew on every page. The Marbled Swarm is Dennis Cooper’s most genius-haunted achievement.”
— Gary Lutz, author of Stories in the Worst Way

Dennis Cooper is the author of the George Miles Cycle, an interconnected sequence of five novels: Closer, Frisk, Try, Guide, and Period. His other works include My Loose Thread; The Sluts, winner of France's Prix Sade and the Lambda Literary Award; God, Jr.; Wrong; The Dream Police; and Ugly Man. He divides his time between Los Angeles and Paris.