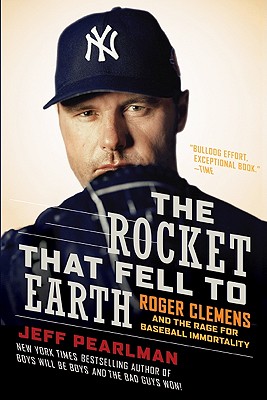 The Rocket That Fell to Earth

Roger Clemens and the Rage for Baseball Immortality

New York Times bestselling author Jeff Pearlman reconstructs pitcher Roger Clemens's life—from his Ohio childhood to the mounds of Fenway Park and Yankee Stadium—to reveal a flawed and troubled man whose rage for baseball immortality took him to superhuman heights before he crashed down to earth.

A fearless, hard-nosed Texan with a 98-mph fastball and a propensity to throw at the heads of opposing hitters, Roger “the Rocket” Clemens won 354 games, an unprecedented seven Cy Young Awards, and two World Series trophies over the course of twenty-four seasons. But the statistics and hoopla obscured a far darker story—one of playoff chokes, womanizing (including a long-term affair with a teenage country singer), violent explosions, steroid and human growth hormone use. . . and an especially dark secret that Clemens spent a lifetime trying to hide: a family tragedy involving drugs and, ultimately, death.


Praise For The Rocket That Fell to Earth: Roger Clemens and the Rage for Baseball Immortality…

"A tragic, all-encompassing look at the life of a man who captured the hearts of baseball fans. . . only to lose it through deep-seated character flaws and bad decisions." — Detroit Free Press

“In this well-crafted bio, author Jeff Pearlman...produces a rich character study, revealing a complex figure ultimately undone by the ambition that made him great.” — Sports Illustrated