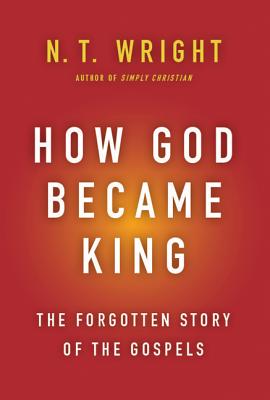 The Forgotten Story of the Gospels

New Testament scholar N.T. Wright reveals how we have been misreading the Gospels for centuries, powerfully restoring the lost central story of the Scripture: that the coronation of God through the acts of Jesus was the climax of human history. Wright fills the gaps that centuries of misdirection have opened up in our collective spiritual story, tracing a narrative from Eden, to Jesus, to today. Wright’s powerful re-reading of the Gospels helps us re-align the focus of our spiritual beliefs, which have for too long been focused on the afterlife. Instead, the forgotten story of the Gospels reveals why we should understand that our real charge is to sustain and cooperating with God's kingdom here and now. Echoing the triumphs of Simply Christian and The Meaning of Jesus, Wright’s How God Became King is required reading for any Christian searching to understand their mission in the world today.

Praise For How God Became King: The Forgotten Story of the Gospels…

“Wright has never been more eloquent and persuasive than in this book that… caps a long, productive theological career.”
— Booklist (starred review)

“The prolific Christian apologist N.T. Wright… now devotes an entire volume, ‘How God Became King’ to this trendy subject. Wright’s insistence that Christianity has got it all wrong seems to mark a turning point for the serious rethinking of heaven.”
— The Washington Post

“We often read the beginning and the end of the Gospels without the large middle where the message of the kingdom rings loud and clear. I recommend to everyone who wants to understand the Gospels’ message in a way that will not only inform the intellect but also transform life.”
— Tremper Longman III, Robert H. Gundry Professor of Biblical Studies, Westmont College

“Tom Wright continues to urge and prod and propose how the church can regain a kingdom footing and end its empire heritage. And, he shows us how we can reshape both what we think about Jesus and how we follow him in our world.”
— Scot McKnight, Karl A. Olsson Professor in Religious Studies, North Park University

“Wright is a scholar who writes as if the material he engages actually matters for the church and the world it lives in… and has again done the church a great favor in presenting the gospel story as the story of God and his kingdom on earth.”
— Englewood Review of Books

N. T. Wright, one of the world’s leading Bible scholars, is the chair of New Testament and Early Christianity at the School of Divinity at the University of St. Andrews, an Anglican bishop, and bestselling author. Featured on ABC News, The Colbert Report, Dateline, and Fresh Air, Wright is the award-winning author of Simply Good News, Simply Jesus, Simply Christian, Surprised by Hope, How God Became King, Scripture and the Authority of God, Surprised by Scripture, and The Case for the Psalms, as well as the recent translation of the New Testament The Kingdom New Testament and the much heralded series Christian Origins and the Question of God.